Things fall apart. The center cannot hold. Such is the case with Jacob Tonski’s sofa, set up on one claw foot like an over-upholstered cartoon diva, defying tippy-toe gravity as she belts out the final impossibly high note of her death aria. Perfect pitch and balance are held as long as possible, although eventually the couch collapses. No worries. It reassembles with magnets.

The Ancient Greeks had no word for Art. The closest they came to the contemporary meaning was techne, or how a thing is done. The French derivative “technique” expresses the same artistic meaning, and one of humanity’s most important words today—perhaps you’ve heard or even used it recently—“technology” rises from the same source. In the case of Tonski’s settee, these are one and the same. His techne is the art of balance via a gyroscope that communicates with satellites; that’s right, Tonski and other techno-artists in this year’s “Annual Currents New Media Arts Festival,” make art using satellites.

And drones, and VR, and holography. And the sharpest edges of video and sound tech, robotics and much digital mapping. All these, and the magical apps and gizmos in that mini palm screen you can’t stop fiddling with, plus. Currents sets the standard for all tomorrow’s art parties. This is how a New Media Festival is done. Put out an international call for new media art. Use this as a basis to curate the show globally by Skype. Rent a big hall. Schedule spin-off events, artist talks and panels. Add pop-ups, sponsors, and more satellites. Enlist local artists and volunteers. Install the massive show in a week. In short, build a local art community as a hardware interface for a global, digital, open—call survey of the best art made using new technologies. And do it again the next year. 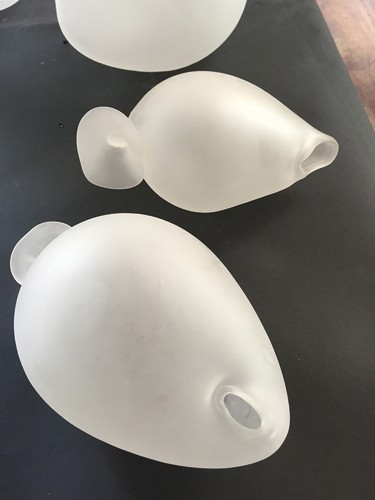 Mariannah Amster and Frank Ragano under the auspice of the non-profit Parallel Studios are the artist duo and curators who have steadily pushed Currents to become the premier event of its kind in the world. At the end of the ’90s, Amster, who started her artistic life as a book artist, and Ragano, whose early work was in installation art, found themselves among a group of artist friends, orbiting Steina, the legendary electric violin virtuoso and her equally innovative husband Woody Vasulka, both of whom were responsible for pioneering work in the territory of interactive video, starting during the ancient times when Pong was the hottest new videogame around.

In 2002, the group launched the first Currents show, with six new media artisans in the vast (and at that point, somewhat decrepit) former tank armory at the Center for Contemporary Arts, now the elegantly refurbished Munoz Waxman Gallery, which they transformed into a stunning space of diverse and interactive techno-visuality. After equally compelling manifestations at Charlotte Jackson’s Art Santa Fe, the long-gone house gallery and restaurant Salon Margraff in Tesuque, and Canyon Road’s similarly extinct Shack Obscura, they started (in 2010) renting space in the city’s Railyard Art District at El Museo Cultural, each June. Fifteen years after that first six-person CCA show, Parallel Studios and Santa Fe’s art community will once again celebrate North America’s foremost gathering for new media art and video installation, during the height of Santa Fe’s summer art season.

2016 saw over 7,000 visitors and this year’s citywide show features hundreds of artists, performers, and robots. 2017 sees an expanded roster of new guest curators invited to handle certain branches of the divergent forms that now fall under the new media nomenclature. August Muth, the renowned holographic artist, curates an installation of holographic works by a wide variety of artists, including C Alex Clark, Santa Fe’s newest art phenomena. The Carl and Marilynn Thoma Foundation, Currents’ primary sponsor at this point, will present an exhibition of two rooms of art from their impressive collection at their Art House location on Delgado Street. And listen up, “SV+VS or Sonifying Visuals and Visualizing Sound”—“the sonic element” as Ragano puts it—will be guest-curated in the main venue for the second year in a row, by Dr. Yoon C. Han, who earned her PhD in Media Arts and Technology at UC Santa Barbara.

Dr. Han and her compatriots represent the burgeoning field of “Sonification” in which synaesthetic responses to sound and music are literalized through digital imaging, and images are in turn algebraically turned into aural sensation. Perhaps you are starting to gather that this is in no way your grandpa’s analog art exhibit. In a slightly less formal fashion, local music and video artist Dwight Loop will gather live music and video performers to rock the Quasar Lounge positioned just outside the main entrance for the opening weekend, June 9 and 10, from 6 PM ‘til midnight. 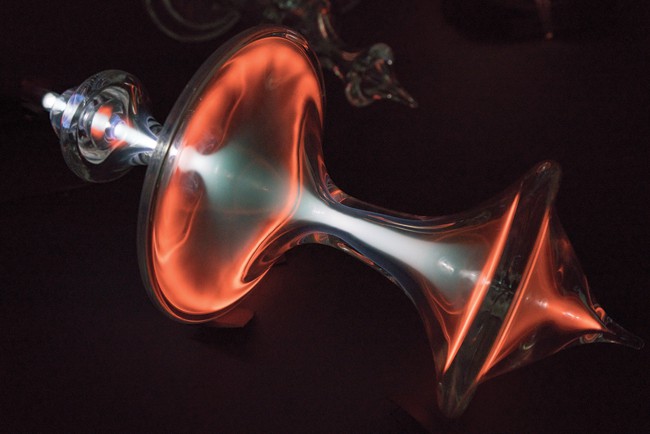 Currents has taken its place alongside the International Folk Art Market, the slightly erratic SITE Santa Fe Biennial, and Indian Market, as a seasonal staple, and now garners citywide support. Examples include Outdoor Vision Quest at the Santa Fe University of Art and Design, and a spin-off show of algorithmically blown glass objects and generative light and sound by artists David Stout and Cory Metcalf, curiously titled “Noisefold: Metamorph and Swarm Caste,” at Sandy Zane’s new Form & Concept Gallery. Zane and her husband Ned Bennett have generously helped support Currents for some years now, both through financial contributions, and by allowing the non-profit to hold meetings in Zane’s gallery conference room when needed. Another neighbor, Violet Crown Theaters, will for the third year in a row offer free screenings of experimental documentaries. The Santa Fe Opera steps to the stage with a tie-in teaser of tech savvy songs from their upcoming production The (R)Evolution of Steve Jobs. Axle Contemporary will park their mobile gallery outside El Museo to house Brainwaves by Shel Neymark and Steven J. Cox. The list goes on and on anon, but be sure not to miss the Currents dance party and fundraiser on Friday, June 16, featuring Machinedrum the newly acclaimed master of electronica at Meow Wolf.

When I sit down for coffee with the chief curators, one of the first things Frank Ragano says, most enthusiastically, is “We have 5 or 6 VR pieces where there’s real art in there this time!” explaining that Currents’ focus is always on the “art side of things.” “There are better venues in the US for seeing the latest developments in technology,” says Mariannah Amster, “but we are interested in the unique ways that artists are using technology.” Emphasis on “artists.” And indeed, there is, currently, no better venue for new media work in the US. They also want me to talk about their paid internship program through AmeriCorps that brings teens into direct contact with every aspect of the festival. And why wouldn’t I?

In Titchener’s Cage, perhaps the most intriguing VR piece of the show, artist Nadav Assor explores both the possibilities of virtual community and astral travel through his Out of Body Experience Machine #2. Edward Titchener was a psychologist who coined the word “empathy” and the cage gives you the chance to experience being in and out of your own body as you interact in virtual confrontation/conversations with a diverse group of digital individuals.

Assor will also present a documentary at the Violet Crown about Jake Wells, a Minister who uses drone technology to spread his unique views on Jesus. Proving that, as in Arcadia during the age of bronze, war technology can be turned to more positive creative urges, though no one has invented a means to resurrect innocently murdered civilians. 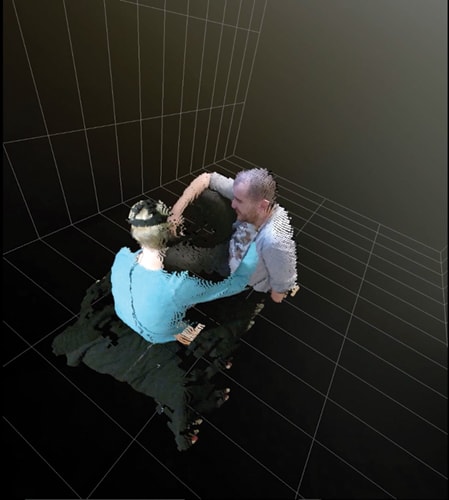 Mitigated confrontation is also the subject of SYNCROP by artist duo Issey Takahashi & Eiko Wada, an interactive piece that requires two people with beating hearts to play. Staring into the ends of an oblong box, the participants grip electrocardiogram (ECG) sensors and when their heartbeats sync, they are able to see one another. If the detached gaze, via Manet, was the hallmark of Modernist figuration, it’s looking like actually looking each other and ourselves in the eyes may well be the analogous premise for the Meta-Modern era.

A more political comment on confronting those unfamiliar to you takes the form of Refugee, a kinetic sculpture by artist Josh Gumiela. A mechanized human finger emerges from a box and steadily taps, waiting, tapping, waiting. With each tap, a small quantity of ash is loosened from the top of the transparent pedestal and slowly drifts with gravity to accumulate on the floor of the piece.

The Ancient Greeks began as the freed slaves and refugees of the Mesopotamian and North African Despotisms, where in the words of Deleuze and Guattari, they had learned to “create the war machine” through the casting of bronze weaponry and farm implements that they sold back to their original oppressor civilizations, before eventually using their highly polished technical skills to create hallmark artworks of profound naturalism. Most of our technological and communication innovations grew originally out of the creativity of military and weaponry development; the Internet is the prime example. To sublimate those urges into art is one of Currents’ finest purposes, and perhaps the ultimate task of tech, and techne.