William Cannings‘ sculptures are immensely popular, due to their visual appeal, which is at odds with the materials he uses to create them. Using metals such as aluminum and steel, he creates flat organic shapes and then blows them up with compressed air, creating bubbles and pillows of metal. These surfaces are a key aspect of the work, and he finishes them with seductive, shiny materials. It’s always a shock to touch one of Cannings’ sculptures, because they look lighter than air. For this show, the artist plans to suspend a group of small shapes from the ceiling using invisible monofilament; he calls the work Swarm. Below will be large floor pieces finished with iridescent “Kameleon” paint, which changes colors as one moves past them. On the walls will be a series of abstracted masks finished in glossy, sparkly black. Inspired by Italian and British racing cars, and the car culture in general, the English-born artist experimented with automotive paint, hand-rubbed lacquers, powder coatings, graphite, and plastic and vinyl pigments. As sculpture-area coordinator at Texas Tech University, Cannings is in charge of metal fabrication, which allows him to experiment with various materials and techniques-all of which should be on ample display in his new show. “Luster Cluster” goes on view at Anya Tish Gallery from September 9 to October 8, 2016. 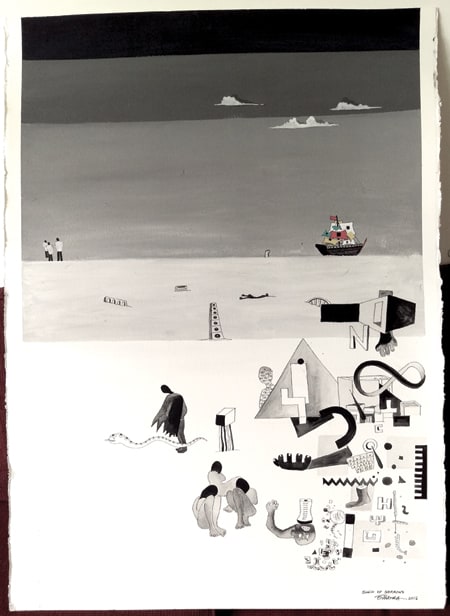 Rahul Mitra is an Indian-born artist and scientist living in Houston who uses his work to create socio-political dialogues about the growing worldwide cultural, economic and environmental disparity. His show’s title, “I Bury My Past So I Can Repeat It,” refers to the social and political Alzheimer’s that today’s society seems to be experiencing. “We have forgotten, buried, or simply ignored the good and bad things that we have done, so we end up repeating them,” Mitra says. Nearly two dozen drawings, paintings and sculptures in the show focus on these universal themes. His “box cities,” which he creates by painting and stacking various types of discarded boxes to resemble an urban landscape, evoke favelas and shanty towns where the poor build shelters from discarded materials. Mitra’s drawing Ship of Sorrows (2016) depicts a ship on the horizon that implies colonization, which is as old as humanity itself. “Ships on the horizon rarely bring good news,” said Mitra, “especially if you are the one on shore.” This surrealist landscape is filled with references to many artists and civilizations, and includes a series of arches, a wheel, a pyramid, a snake, the symbol for infinity, as well as images from Picasso’s Guernica and Gauguin’s Tahitian paintings. The show at Gspot runs from September 3 – 28, 2016. 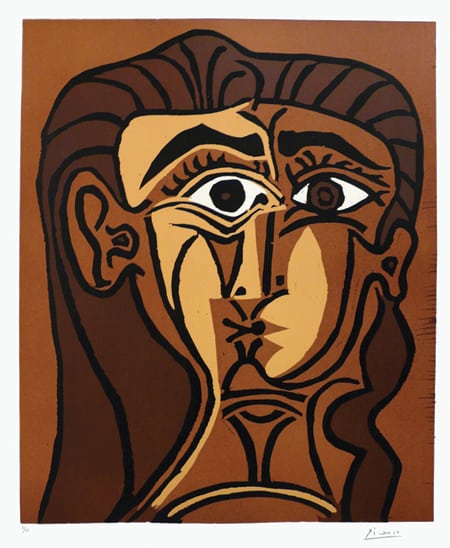 “Imagining Backwards: Seven Decades of Picasso Master Prints,” at McClain Gallery, is a retrospective of more than 50 Picasso prints from 1905 to 1970. The show explores Picasso’s printmaking techniques and provides a survey of portraits of his most famous muses. These female portraits also reflect various artistic styles, from realist to cubist to surrealist. Among his subjects are Marie-Thérèse Walter, Dora Maar, Françoise Gilot, Geneviève Laporte and Jacqueline Roque, his second and final wife. Picasso met Jacqueline when she was 26 and he was 72, and courted her until she agreed to marry him in 1961. They were married for 11 years before his death in 1972. Picasso did some 400 portraits of her, more than any other woman. Stylistically, the linocut of Jacqueline in this show dates back to late cubist portraits of Dora Maar in the 1930s. This 1962 portrait portrays Jacqueline’s dark eyes and strong profile, which reminded Picasso of the women who appeared in paintings by the 19th-century French painters he admired. The show coincides with “Picasso: The Line” at the Menil Drawing Institute, and is accompanied by a fully illustrated catalogue with essays by art historian Charles Stuckey and a forward by Picasso expert Gary Tinterow, director of the Museum of Fine Arts, Houston. “Imagining Backwards” runs from September 13 to October 29, 2016. 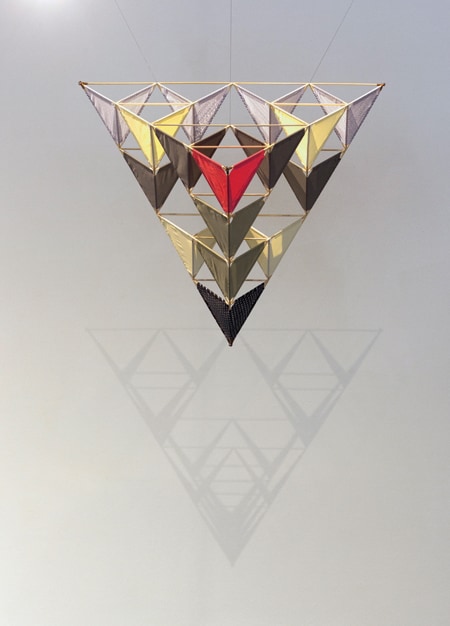 Josh Bernstein is project-oriented; his past shows have focused on various subjects interpreted through a range of mediums, including textiles, drawings, photographs, sculpture, performance and video. For his previous body of work, Bernstein followed the travels of Spanish explorer Álvar Núñez Cabeza de Vaca, whose royal expedition to occupy North America was waylaid by hurricanes, Native Americans, starvation, and other factors. Bernstein’s new work reflects his fascination with the concept of space and ways to rise above the earth. While reading old library books on the subject, he encountered Alexander Graham Bell’s theories about space and his fascination with kites, which began in 1899 and continued into the early 1900s. The inventor believed that a successful kite would eventually lead to a flying machine and built complex tetrahedral kites (a tetrahedron is a three-dimensional triangle). One of Bernstein’s three kites in his new show, which is titled “Moon Finger,” is modeled directly on a Bell kite. Constructed from dowels and strips of fabric cut from old clothes, and suspended from the ceiling, the large kite is beautifully executed. The exhibition also includes ink-on-vellum drawings involving rubbings related to creatures Bernstein heard in the attic over his garage studio. “Moon Finger” runs at Devin Borden Gallery thru October 4, 2016. 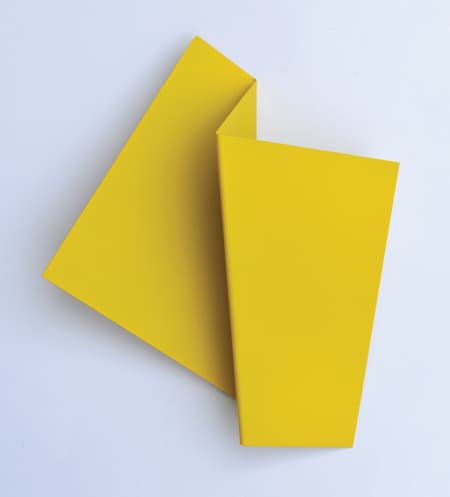 Dirk Rathke‘s new work at Sonja Roesch Gallery is a departure from his previous three-dimensional, curved and stretched paintings on canvas. For this show, the Berlin-based artist worked with metal, folding and painting it with pure colors ranging from orange to rose to black. Rathke is part of a younger generation that is developing fresh approaches to geometric minimalist work. Minimalism was one of the last great modernist art movements, and it still resonates today. The result are beautifully shaped and finished objects, elegant investigations into line, shape and color. Rathke’s wall pieces are part painting, part sculpture; with their folds and angled surfaces, they play with light and encourage the viewer to move around and view them from various angles. In the early days of Modernism, artists such as Piet Mondrian sought to disassociate their work from references to the external world in favor of a purely nonobjective style, with a universal reality. The minimalist painters and sculptors who followed in the 1960s reduced their work to basic geometric forms, discouraging viewers from bringing their own associations to the work. Rathke’s work, by contrast, deliberately courts imperfection
and even a certain intimacy. His show, titled “Foldings,” can be seen at Sonja Roesch Gallery, from September 10 to October 29, 2016. 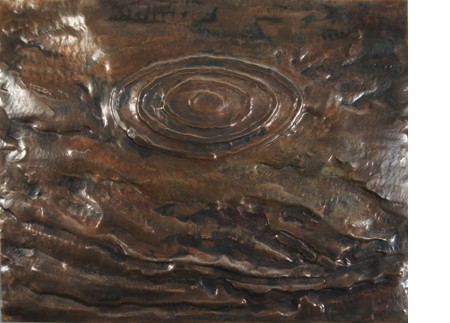 Since 2014, Houston metal sculptor Ed Wilson has been embroiled in a debacle regarding a public-sculpture commission for Houston’s George R. Brown Convention Center, but that will be coming to an end this fall when his $1.03 million sculpture finally opens to the public. The installation of dramatically lit floating clouds and birds in flight will occupy about 180 square feet of airspace in the lobby, where it will also be visible from the street. Wilson was awarded the contract two years ago, but it was rescinded and then re-awarded in 2016. His upcoming show at Moody Gallery includes drawings, prints and other pieces related to the commission, but there are other works as well. A number of wall pieces made from hammered steel depict tumultuous water with rippling waves and whirlpools. Life in Houston involves living under threat of hurricanes half the year, and these strong pieces convey the power of these massive storms. An emotional series titled Rupture reminds the viewer that nothing in life is promised, as the surfaces of these mottled metal rectangles are perforated by unsettling gashes and eruptions. The show will also include the large sculptures for which Wilson is best known.The exhibition at Moody Gallery runs from October 22 to November 19, 2016. 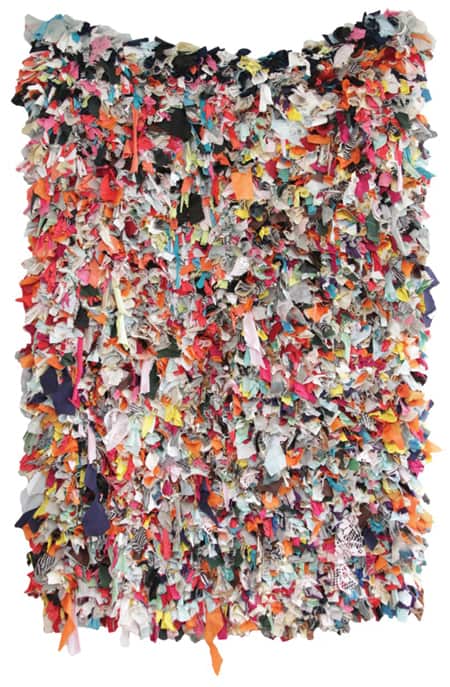 In a new body of work titled “Resilience,” Alfredo Scaroina moves in a new direction. His latest wall pieces are not paintings on canvas but rather fabric on panel, assembled from thousands of pieces of discarded clothing once worn by children from his homeland, the Dominican Republic. In a trip home, Scaroina was inspired by poor children playing and having fun, regardless of the fact that they have little to eat and few possessions. He spent weeks bartering for the used clothing, sometimes trading them for new clothing or other items. Back in the studio, he wove, tied, and otherwise assembled them into textured pieces that are vibrant and three-dimensional. Scaroina likes the irony in the fact that his new pieces, which reflect the poverty of his country, will be viewed in upscale surroundings and purchased by wealthy patrons. “I want these pieces to have a purpose, a real punch,” Scaroina says. “When I look at them, I see those children being happy with what little they have.” The artist continues to use experimental techniques and materials to explore the power of art to effect change. The show can be seen at UNIX Gallery from September 9 to October 8, 2016. 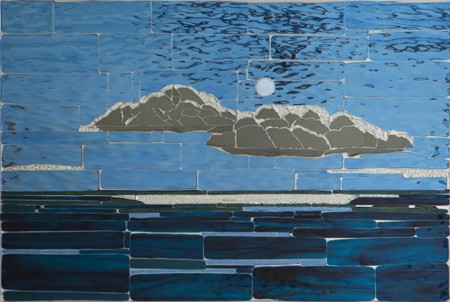 Although Libbie J. Masterson shows at a photography gallery, she is much more than a photographer. Trained academically in glass, she has created public pieces using the medium, including a major glass installation at Houston’s Hobby Airport. In her new series of seven glass panels, titled “Spectrum,” Masterson investigates the colors of the spectrum and their relationships with each colors’ “aural” associations. Eventually, the series will include music that accompanies the pieces, thanks to a music composition course Masterson took a couple of years ago. The new glass pieces begin as stained glass, which she cuts, shapes and otherwise manipulates before backing it with mirrors, giving them amorphous reflective and translucent qualities. Masterson has always been interested in light and materials that conduct light, which led her to work with fiber optics and lasers in the past. Regarding her photography, she is interested currently in creating photographs with a minimal amount of light, which she calls “ghost prints.” Some were created with long night exposures to achieve images with just a hint of light. Masterson is also a painter, and she includes related watercolors in the show as well. The exhibition at Catherine Couturier Gallery runs from September 10 to October 15, 2016. 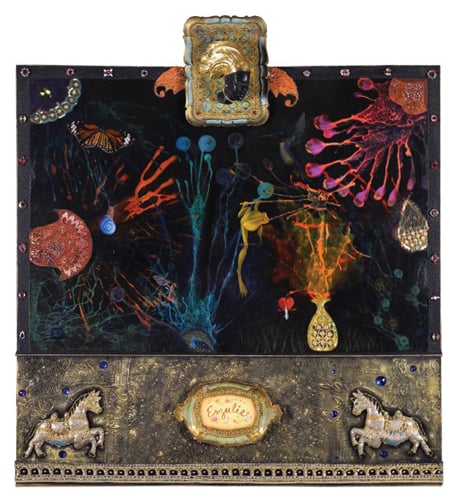 Deborah Colton Gallery is working with Houston’s longtime non-profit, the Community Artists’ Collective, on a series of exhibitions of works by women of the African diaspora in celebration of the Collective’s 30th anniversary next year. “Tribute: Women Artists of the African Diaspora” includes African and African-American artists Ann Johnson, Jean Lacy, Annette Lawrence, Delita Pinchback Martin, Sondra Perry, Alison Saar, Kaneem Smith, Renée Stout, Colette Veasey-Cullors and Erika Walker. These women will be showing paintings, sculpture, works on paper, video, photographs and installation pieces dating from the 1970s to the present. Lawrence first became known to Houstonians through the Museum of Fine Arts, Houston, Core Program for her compulsively autobiographical work involving counting, body cycles, and other ways to measure daily life. Saar also focuses on the body as a means to reflect on identity, as well as express past injustices; her work references lunar cycles, fertility, and related mythology. Veasey-Cullor uses documentary photography to investigate race, class, education, and identity as well. A portion of the proceeds of the show will benefit the Community Artists’ Collective, which has created opportunities for African-American artists through exhibitions, education, entrepreneurship and community-development programs. The show will run from September 17 to November 5, 2016.