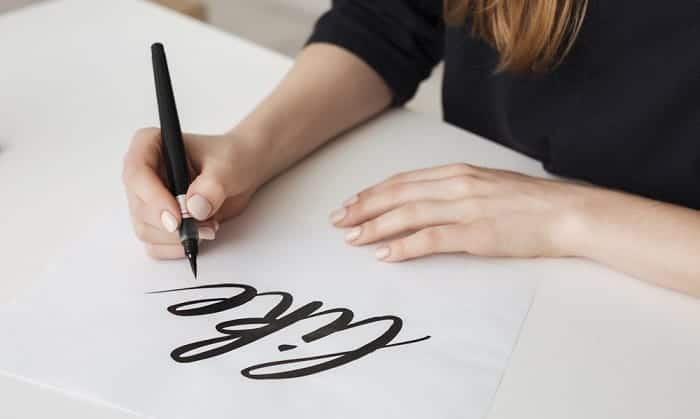 Calligraphy is a wonderful means of art in which we can creatively design our own handwriting. As you may have known, practicing the basic strokes are one of the first lessons to master calligraphy.

Nevertheless, your practice will have little results if you don’t know how to hold a calligraphy pen correctly. You might think how on Earth can a person not know how to grip a pen, right? Believe me, it is way more difficult than it seems.

A proper calligraphy grip requires a variety of techniques that you might not be aware of. However, once you’ve learned the correct method of holding a calligraphy pen, your practicing will enhance dramatically.

Therefore, in this article, I’ll show you the correct technique of a calligraphy pen grip:

That was a brief introduction of what I’m going through today. Are you fascinated to find out these amazing techniques? Let’s get started with sitting properly in calligraphy! 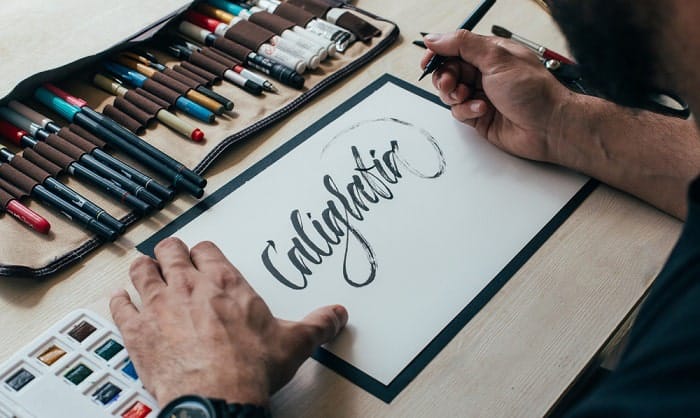 Nobody wants to injure their spine while producing art pieces. Therefore, learning the proper sitting posture will prevent you from harming yourself. Moreover, it will create a position to practice calligraphy conveniently for a long time.

First of all, find a desk or table with a comfortable chair. The height of the table shouldn’t be too low or high. Try different sets of tables and chairs until you find the most comfortable one.

In addition, your writing surface shouldn’t be slippery, so choose a table that can hold your paper while you are writing. Another alternative is to use masking tape or paper tape to keep the paper in place.

Keep your back straight and place your paper right in front of you on the table. Now, there are two ways to create the slant for your calligraphy:

These methods deliver the same effect. Hence, feel free to try both techniques to find the position that works better for you. Once you have found your position, proceed to practice holding a calligraphy pen.

How to Hold a Calligraphy Pen (In General) 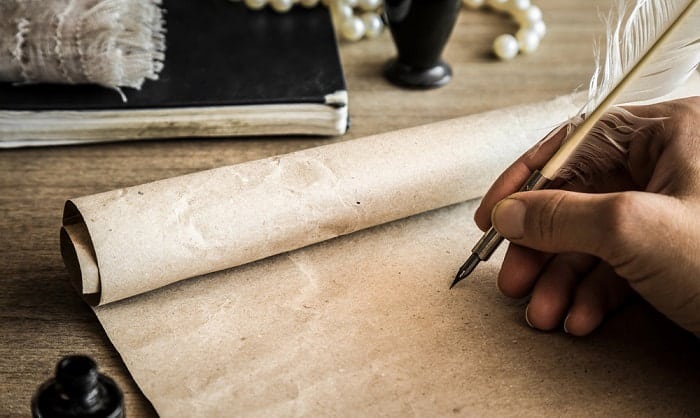 As I’ve introduced above, there are four basic types of calligraphy pens; brush, felt-tip, dip, and fountain. Whichever pen you use, you must know how to grip them so that you’ll produce astounding artwork as desired.

Your improper pen holding style is easily detected by looking at your letters. Thus, in this section, I will give you a tutorial on the calligraphy grip before going into the different calligraphy pens.

Firstly, this is how to place your fingers on the calligraphy pen:

Step 1: Use your dominant hand to pick the pen up and grasp the pen loosely so you can move your pen in between.

Step 2: Place your index finger on top of the pen’s body.

Step 3: Your thumb should be on the side of your pen.

Step 5: Adjust the pen so your fingers are approximately an inch from the pen nib.

Step 6: Lean the pen towards your shoulder at a 45-degree angle compared to the table. The angle is super vital because it will allow you to create the strokes easily. Therefore, always be aware of the angle of your pen while writing.

Furthermore, you must not hold the pen too tightly. Let it sit loosely on your hand so it can flexibly move along your calligraphy session. This helps make your letters and strokes more soft and gentle.

Try to keep your arm straight when writing. Don’t bend your wrist too often; your wrist should only come into play during a curve. In addition, don’t let your fingers control your writing since they ought to be supporting players.

Instead, move your forearm along with your hand while doing calligraphy. Consequently, your calligraphy will become more consistent, and your skill will enhance drastically.

Now that you have learned the general principles of holding a calligraphy pen, you should read below to see more details about each type of pen.

In this section, we will look into other details when drawing with the four types of calligraphy pens. Make sure that you read it over carefully so you won’t miss any crucial steps.

What is special about this pen is that the bristles of its head are made of nylon or sable, which makes them quite soft and short. Plus, more flexibility and control is allowed.

However, these brushes aren’t designed to hold ink. Therefore, you must be well-aware of when they are running out of ink so you can replenish by dipping the tips into ink.

You can hold this brush pen as guided in the steps from the previous section. Additionally, over time, you can practice rolling the pen between your fingers to adjust the strokes’ tones.

Hold your pens as instructed above. Yet, you can slightly lower the angle while holding so a side of your pen fully contacts the paper, creating beautiful downstrokes.

These pens are suitable for both advanced and beginner levels. However, you need to hold your pen right on the shaft. It will give you better control of your pen.

Moreover, don’t put too much pressure on the nib so you can see the pen tines sitting evenly on the paper.

These pens are extremely common for professional calligraphy. Once you have mastered the basics, you can proceed with the fountain pen.

There is nothing too remarkable about learning how to hold a fountain pen. You just have to remember to place your finger right on the shaft of your pen.

I put this type of pen into a separate part because many people believe this pen is so special that it’s challenging to write. However, it is not as difficult as rumored.

An oblique calligraphy pen has a flange sticking out from the side of its straight body. This tool is helpful for those who want to create the right-leaning slant but don’t want to tilt their paper to the side. In other words, this pen is for the second method of how to produce slant that I introduced in the first section.

Holding an oblique calligraphy pen is as easy as putting your index finger and thumb on the straight part of your pen so your thumb’s tip is right above the flange.

If your nail is too long, move your fingers closer to the end of the pen’s body, which is the same end where the flange is located. Your thumb at this moment should be right on top of the flange. Then, proceed with your calligraphy as you normally would.

I will keep this part as concise as possible, so don’t miss this section. There are two things you should avoid while holding a calligraphy pen.

First of all, don’t hold your pen straight up or vertically to the paper. It will make the ink flow much smoother and create blemishes on your work. Secondly, keep your finger close to the nib as I’ve instructed so you can have full control of your pen.

Knowing how to hold a calligraphy pen is extremely essential for any calligrapher, especially those who are just stepping into the realm. Despite its initial complications, you will gain some muscle memory after practicing a few times.

I hope you have enjoyed this calligraphy tutorial. Let me know what you think in the comment section. If you find this helpful, share it with your friends and family as well.