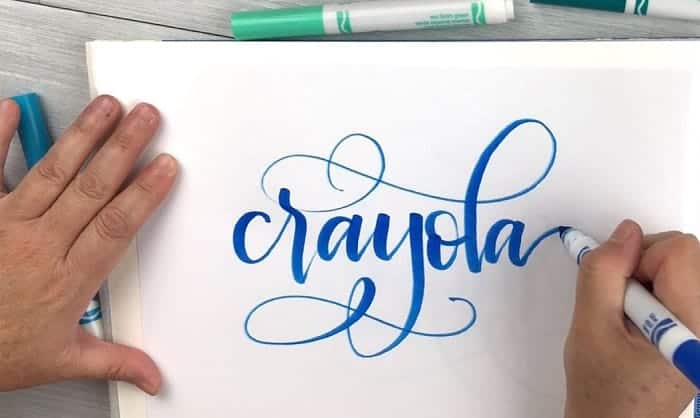 Have you ever seen Youtube videos on breath-taking handwriting using a brush pen? Are you inspired to produce the same masterpiece one day, but you don’t know how to?

Calligraphy is a process of creating such artistically decorative hand lettering that requires tenacity and practice. Moreover, anyone can create calligraphy using affordable products such as Crayola markers.

What a relief to know that modern calligraphy can also be done with such a cheap product, right? Therefore, this article will show you how to do calligraphy with Crayola markers in very simple steps.

Step 1: The Right Way to Hold Your Marker: Lean your marker at a 45-degree angle, use your index finger to apply pressure to your marker.

Step 2: How to Move Your Arm Correctly: Bend your wrist slightly when drawing curves. In other cases, keep your arm straight.

Step 3: The Basic Calligraphy Strokes: Start with the up and down strokes, then move on to the remaining six strokes.

Step 5: Stroke Transition Technique: There are two methods for your calligraphy transition: the gradual or the stroke-by-stroke transition.

Besides, at the end of this article, there are small tips that can help you improve your calligraphy skill. Therefore, remember to read until the end!

What is the Difference

Even though Crayola markers are a perfectly cheap alternative to exorbitant professional brush pens, there are some differences in the writing process as well as the final outcome.

First of all, since the brush pen has a more flexible tip, you can create letters or lines with a wide range of thickness. On the other hand, Crayola marker tips are quite stiff, which makes your process slightly more difficult.

Furthermore, if you put too much pressure on the marker tips, you may risk damaging your markers in the long run. However, a brush pen doesn’t face this problem thanks to its soft tip.

Apart from these differences, I’m sure that everything else works fantastically while lettering with Crayola markers. Continue reading to find out the necessary materials.

What You Will Need 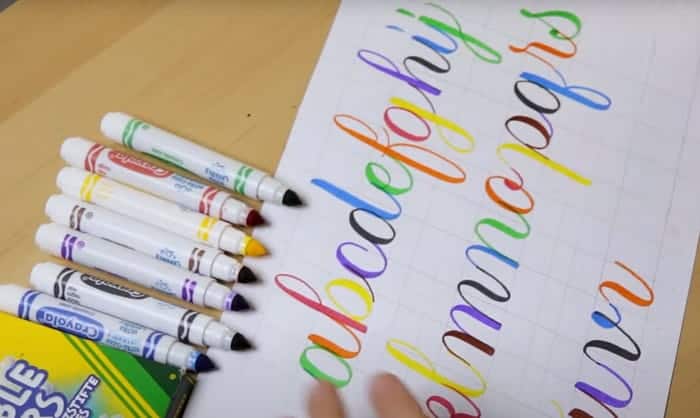 Before we start, let’s gather some essential materials for this tutorial. More details will be given in the following paragraphs, so read carefully to make sure that you have the right products:

Crayola Markers are, of course, our spotlight in this tutorial. Different kinds of Crayola markers should work well in this case.

It is best to write calligraphy with a marker whose tip is cone-shaped so that you can create thin and thick lines as you desire. Other brands can be used as they meet this requirement.

Moreover, using the standard Crayola markers can be a great start for those who want to pursue a calligraphy career. Once you have mastered Crayola markers, proceeding with the professional brush pens will be much easier.

Using a rolling ruler will make this process less challenging, but a normal one won’t be any worse. You will also need a pencil and eraser to draw the frame; any brands will work the same.

Last but not least, to prevent ink bleeding while doing the calligraphy, it is advised that your paper shouldn’t be too thin. Some recommended papers you can refer to are HP Premium 32, Strathmore Tracing paper, Canson Marker pad, etc.

Now that you have everything ready, let’s learn how to hold your marker properly!

How to Do Calligraphy with Crayola Markers

1. The Right Way to Hold Your Marker

Holding a Crayola marker while doing calligraphy isn’t the same as holding a regular pen. Therefore, make sure that you know how to hold it properly before learning other drawing techniques.

Hold your markers at a lower angle than you would normally do, preferably at 45 degrees. This will make sure that a whole side of your Crayola contacts the paper and delivers a nice thick line.

Moreover, this posture allows you to flexibly move from the marker side to its tip and produce the wanted lines. Additionally, place your index finger on top of the marker case so you can add more pressure to the marker while doing the downstrokes.

2. How to Move Your Arm Correctly 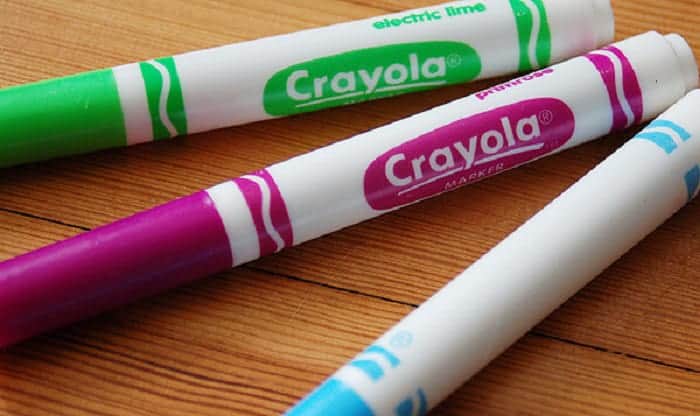 Besides knowing how to hold the marker, it is vital that you learn the proper technique of moving your arm during the process. Do NOT use both your fingers and wrist as it may result in squiggly handwriting.

Practice using your fingers with the assistance of your arm. Keep your arm straight to have the best effect. Only tilt your wrist slightly when drawing curves.

Keep your drawing space wide enough so you will have room to move your arm around. Don’t worry if this sounds difficult, you will be more confident after a few times. Proceed with the following sections to learn the basic calligraphy strokes.

There are two calligraphy strokes that you have to spend a lot of time practicing in the beginning, which are the upstroke and downstroke. An upstroke helps produce thin lines while a downstroke leaves thick lines.

Note that every word you are going to write in calligraphy will include this combination. Hence, it is VERY important that you practice these basic drills as much as possible before starting to practice with words.

In addition, understanding and being able to draw these strokes will later on ease your Crayola calligraphy practice as well as create consistent pieces of art. It might take you days to learn, but don’t give up because practice makes perfect!

First of all, use the ruler and a pencil to draw two parallel lines. You will exercise your calligraphy within these two straight lines. Next, begin your practice with either strokes.

Once you are used to the two basic strokes, proceed with six other strokes: the under and overturn, the ascending and descending loop, the oval, and the compound curve. Refer to the photo to see how they look.

Take your time practicing the strokes individually before you start combining them and making letters.

As I’ve told you, letters are just combinations of different strokes. Hence, whenever you try to draw a letter, just break it down into small strokes using your imagination, and you will know how to write it.

For instance, while the letter “a” comprises an understroke and an oval stroke, the letter “h” consists of a compound and an ascending loop stroke. Once again, this emphasizes the importance of getting a solid grasp of the eight fundamental strokes.

Remember to practice both uppercase and lowercase letters because you will need both of them to start practicing a word.

Once you have mastered the letters, go ahead with writing words of your interest such as marker, calligraphy, Crayola, or even your name! Then, continue to gather those words and make many phrases.

There are two methods that can make your transitions between strokes become smoother:

Try not to lift your marker whenever you finish a stroke if you want your Crayola calligraphy to look smooth and gentle. Instead, continue until the end of a word or phrase. This will help your calligraphy look more consistent and comprehensive.

In addition, challenge yourself with some pangrams, such as “Pack my box with five dozen liquor jugs”, or “The five boxing wizards jump quickly”. Why? Because they contain every letter in the alphabet.

Alright, that is enough theory on how to write calligraphy with a marker. It’s time for you to dive into work!

It can be a little bit frustrating the first several times doing this Crayola calligraphy as it doesn’t come out as beautiful as you expect. However, I promise that your skill will get better and better every day as long as you are determined enough.

Additionally, if drawing on your own is too difficult, try out some Crayola marker calligraphy worksheets on the internet. These worksheets are printable and easy to follow since they already have the stroke or letter frames. There are a wide variety of free Crayola calligraphy practice sheets available that you can find in just a few minutes.

Learning how to do calligraphy with Crayola markers will save you a lot of money not having to purchase an expensive brush pen. Nonetheless, it is a long journey to learn calligraphy so you must be persistent.

I hope this article has provided helpful information. Let me know about your Crayola calligraphy masterpiece in the comment section, and share this with your friends as well.