Dawn Clements, “Tables and pills and things”
at Pierogi
On view through May 7, 2017

Dawn Clements’s panoramic drawings of tabletops and interiors are Proustian in their sweep across ordinary objects, each rendered with transporting hyper-observation. Shimmering graphic facts, in these large, airy compositions, float upon a gently rippling metaphysics of past and present––and also, never-was, as when Clements recreates settings from old films. Jessica Drummond’s Kitchen, for example, is a portrait of the titular room assembled shot-by-shot from the soundstage fictions of a Barbara Stanwyck weeper (My Reputation, 1946). Other works on view are seemingly straightforward depictions of Clements’s drawing tables and studios. But these, too, are contrived from disjointed observations, assembled page-by-page as a daily practice, which includes diaristic jottings of text. The searching refinement of her technique, whether in razor-sharp ballpoint or translucent watercolor, remains porous and radiant even when, in sprawling arrangement of fruit, flowers and drawing implements, the artist includes a still life of extremely serious pills in tenderly transparent bubbles.

Shawn Thornton, “Pareidolia”
at CUE Art Foundation
On view through May 24, 2017

The painter Tom Burckhardt has curated an exhibition devoted to the impossibly dense paintings of Philadelphia-based Shawn Thornton, shown alongside sculpture and videos of the artist’s alarming performances on an amped, stringed instrument of his own devising. The artist’s biography is front and center in his work: an undiagnosed tumor in his pineal gland, since removed, gave him visions. The paintings are close-packed and curvaceously geometric, with bits of somewhat fussily rendered imagery –– caterpillars, disembodied heads, quotations from Flemish masters, all smaller than a fingernail –– captured in a matrix of diagrammatic circuitry, alchemical symbols, text fragments, and much more. Witch Doctor at the Eye of the Solar Epoch, the largest and best painting on view, combines the lightning flash of vision with infinite patience (the work is dated 2008-10). While its sprawling composition suggests the mythologies of Pollock or Richard Pousette-Dart, its controlled, genuinely psychedelic vibrations command the eye along lines pioneered by the great “oracle,” Steve Wheeler. 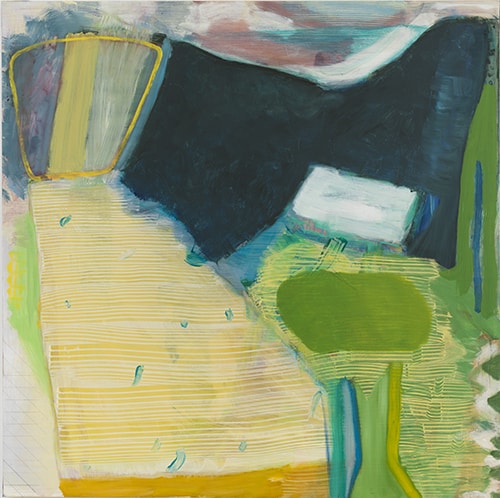 New York painter Julian Hatton is a master of elegantly feral landscape abstractions. The 40 or so panels on view, though modest in proportion, are unapologetic declarations of balanced variety—wild veerings of scale, speed, viscosity, texture, and palette. Much like the cannily anarchic work of Amy Sillman, Carrie Moyer or Elliott Green, Hatton’s paintings surf on sheer talent. Hatton’s sumptuous exploration of color is especially ravishing—nostalgic, yet also new and strange each time. While previous paintings swerved between studio practice and on-site observation, the new ones almost renounce imagery. Still, the paintings remain happily lost in the woods, with Hatton sprinkling glyphic vestiges of trees, plowed fields and perhaps the rusting hulks of old trucks amid the swipes, stains, and luscious blobs of pigment. The paintings’ square formats, large and small (either 10″ or 42″), allow them to rotate in the mind like aerial views of mental maps.

Skipping crucial periods in New York, Europe, the Southwest and elsewhere, this exhibition’s focus on Maine can seem arbitrary, even touristy, particularly for those who remember the Whitney’s revelatory 1980 retrospective in the same (beautifully refurbished) building. But this digestible show makes its case as a cross-section through Hartley’s core. Born in the hardscrabble provinces of Maine, Hartley became a cosmopolitan American modernist before returning in his final years and nurturing a lifelong lonesome fury. Early mountain paintings, though daubed with the optimistic palette of American Impressionism, have a manic intensity closer to van Gogh. Similar scenes done after an encounter with A. P. Ryder’s art, are stringy, rude and bleak. The show contextualizes the folksy, kitsch element of Hartley’s later dock scenes as part of a campaign by the literally starving artist to establish himself as a regional laureate. But Hartley was no Benton; the same impulsive drawing and insistent disproportions sing Hartley’s true song in portraits of huge, hairy beasts of local men, splendid with Whitmanesque desire. Hartley’s great coda of Mt. Katahdin paintings never vary much in composition, yet encompass a restless lifetime’s probing of color and touch, in service to a heart-on-the-sleeve temperament that can devastate as much as a late Schubert quartet.

Roxy Paine’s recent dioramas are related to natural history ideas in his extravagantly lifelike portraits of plants and fungi, but also to mordant aspects of his art-making machines, a body of work that, arguably, makes humans obsolete. The dioramas are painstaking, askew scale models of man-made habitats from which, one might imagine, the extinct species of Homo sapiens has been removed for taxidermy. Meeting (2016) is a carefully observed circle of chairs, as from the aftermath of a subterranean AA or deprogramming session. experiment (2015) is a diorama within a diorama, inferred from accounts of CIA experiments with LSD and one-way mirrors. These scenes are precisely rendered with convincing finishes; previous dioramas, however, were left unpainted, the raw wood reversing the transmutation of materials in Paine’s tree hybrids, or “dendrites,” in which gleaming stainless steel transfigures living timber. That virtuoso phylum of work continues to speciate, in a second gallery space, with a tabletop collection of deftly welded mutants.