On December 6, people involved in San Francisco contemporary art started tagging their friends on social media who had won the SECA Art Award, sharing pride and congratulations. Albeit arguably superficial in its medium, the flurry provided a glimmer of hope in unsettling times, and the outpouring rings true that SF is a haven for artists that champion hybrid, non-traditional art-making—who bend the rules—their practice made all the more visible by museum support. San Francisco’s Museum of Modern Art (SFMOMA) has a long history as an innovative and groundbreaking museum. From its early inception in 1935 when it was known as the SF Museum of Art, SFMOMA has spearheaded a number of initiatives, awards and exhibitions including Jackson Pollock’s first museum solo exhibition in 1945, the establishment of the Rental Gallery (now Artists Gallery)—the first of its kind in the US—and in 2014 the launch of The Artist Initiative, a program that provides collaboration opportunities for living artists. That legacy of looking forward continues with the newest iteration of the SECA Art Awards.

SECA an acronym for the Society for the Encouragement of Contemporary Art grew out of a group of collectors that formed in 1961 with the goal to educate their members about contemporary art, and to help in the growth of the SFMOMA permanent collection. Other museums have had similar groups that offer special services to its members of special groups that usually entail private events, talks or studio visits, such as the MOCA Contemporaries at the Museum of Contemporary Art, Los Angeles, which was established in the mid-1980s, or the Young Collectors Council or the Patrons Circle of the Guggenheim Museum. None have been as long-standing as SECA, which is the oldest such modern art museum group in the United States dedicated to furthering education and acquisition of local art. The SECA Art Award has been privately funding art awards to Bay Area artists since 1967. To date, SECA has honored over 150 Bay Area artists, for visual art, film, photography, video and experimental design, among them painter Squeak Carnwath, multi-disciplinary artist Bruce Conner, and filmmaker-writer Trinh T. Minh-ha, to name but a few. Since the 1990s, SECA awards are selected by curators at the museum and this year’s curators are Jenny Gheith, Assistant Curator of Painting and Sculpture and Erin O’Toole, Baker Street Foundation Associate Curator of Photography. “At the heart of the award,” says Gheith, “is the strengthening relationships for the artists” that includes not only the monetary award, but exposure to their work on a grand scale that cannot be accomplished with a gallery exhibition, in addition to valuable resources such as preparatory assistance, a catalogue and public programming. This year the team is particularly excited that each artist will get their own solo space—the first time in history of the biennial award—for a summer exhibition on the fourth floor of the museum.

This year’s awardees are five visual artists that cover a range of disciplines, from painting to sculpture to photography: Liam Everett, Alicia McCarthy, Sean McFarland, K.r.m. Mooney, and Lindsey White. Coincidentally, the finalists and the awardees happen to know of each other’s work, either through showing together in galleries or as colleagues in the academic world. “The tightness of the community became revealed as we did the studio visits,” recalls O’Toole. 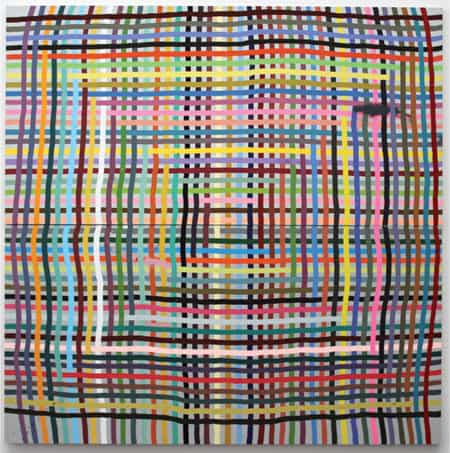 Likewise, friends and fellow artists have always been at the helm with awardee Alicia McCarthy. McCarthy’s work stems from the urban grit of San Francisco, having begun her trajectory as an artist in the early 1990s, along with a cohort of artists who were also attending San Francisco Art Institute at the time including Barry McGee. Using urban streets as material and surface, graffiti art, writing and “throwies” are not just about making one’s personal mark, but an important aspect of street art is doing it alongside others. Central to her practice is the concept of inclusion, and her iconography is predominantly abstract paintings that involve expressive thin lines of color that crisscross, creating “weaves—a synthesis of what I experience day-to-day that comes out in the formalities of the work.” In a sense they are “metaphors” for life,” with each line mixed independently—no two are the same, much like daily life.”

McCarthy recognizes that so many great artists don’t get the same opportunities, which has prompted her commitment to including other artists in every opportunity that she gets since an early gallery exhibition in 2004 that included a large installation of over 90 other artists along an over 20 foot wall. For her exhibition at SFMOMA, McCarthy will be including the work of Aaron Curry, aka ORFN, who passed away in December from cancer at the age of 42. It’s not a matter of generosity she emphasizes, but rather “it’s who I am… how I choose to deal with the spaces I am given, and I am not afraid to celebrate other peoples’ work.” 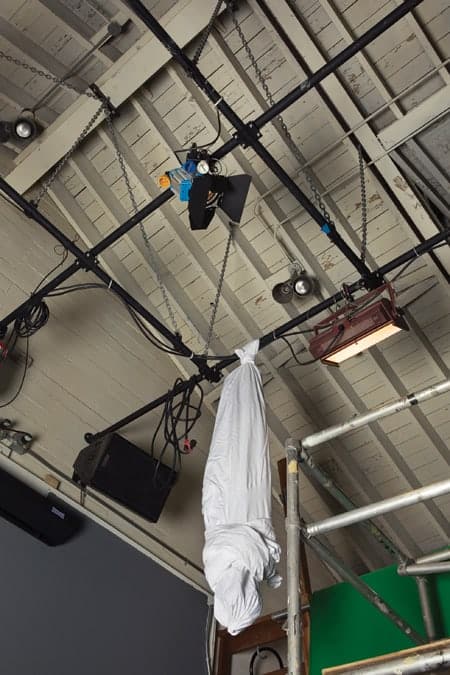 Lindsey White also frequently works with other artists and collaborators on her projects. One of the founding members of Will Brown, along with Jordan Stein, and David Kasprzak, their para-curatorial/artist-run experimental space was once housed in a store-front in the Mission District and boasted a host of quirky yet conceptually rich exhibitions, performances, talks and limited edition objects. Her interdisciplinary sculpture, video and stagings are humorous and frequently deal with notions of accidents or mishaps that emphasize the absurdity of everyday life, particularly aspects of the mundane as a “staged performance.” Her work frequently incorporates performance, whether creating a color study by throwing colored glass jars on the floor or documented coffee spewing from a useless, perforated paper coffee cup, her work explores “public and private notions of success and failure, and the often unconscious ways in which an audience is influenced.”

White has already been working on much of the work that she will show at SECA, creating an industrious installation of photographs, fiberglass and aluminum sculptures, photographic banners and oversized potholders—all of which are inspired by the professional and amateur worlds of magicians and comedians. Since 2014 she has been working with Los Angeles based comedian Ron Lynch on a series of projects and research. Working with Lynch has brought to light “the double standards of women in the comedy and art worlds—male-dominated fields rife with unfair expectations and challenges. It’s at this point, when the mechanics of stagecraft meet broader social concerns, that I feel art can truly play an important role in contemporary culture.”

Photo-based artist Sean McFarland is taking a more personal approach to the work; his practice nevertheless actively engages with concepts of movement and deterioration despite their fixity. Employing Polaroid, emulsion prints, newsprint, collaging and multi-exposure, his recent multi-media works are “records” of the landscape; records meaning they are collections of photographs, books, videos and drawings that are all forms of landscape representations which together are metaphorical documentations that blur the lines between reality and fiction, between truth and the imaginary.

The compilation of materials and objects create a narrative centered on the notion that life, and the landscape in particular are tenuous states of existence constantly changing over time. Through a course of acutely slow migration either seismically, or through the ephemeral changes of light as the day progresses, sometimes tracing the motion of the sun as it moves across a mountain over a the course of a day, or multiple layers of a single destination that creates one exaggerated version of the real subject. Other recent works are printed on fragile, non-archival newsprint that will fade and disintegrate over time. Notes McFarland, “I don’t see the award shaping or changing my daily practice so much as providing an opportunity to produce an exhibition I wouldn’t normally have the means to realize.” 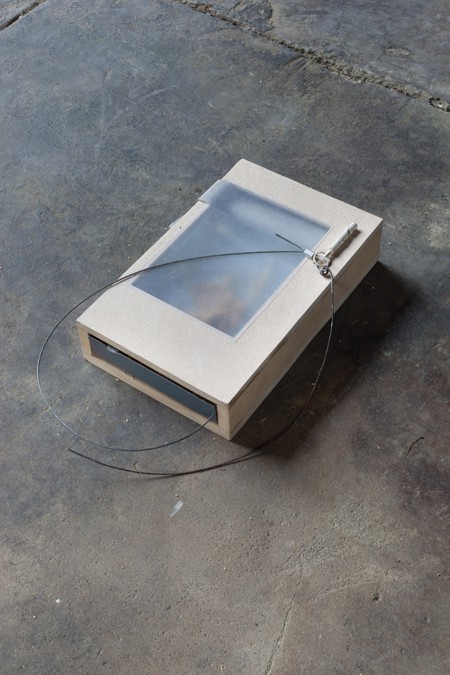 K.r.m. Mooney has been immersed in rigorous conceptual research and has been making thoughtful considerations for the exhibition space itself—how bodies navigate the space around, toward, away or near objects situated within it. Recently, Mooney’s attention has been focused on bioacoustics, prompted by philosopher and materialist writer Christoph Cox’s essay, “Sonic Thought,” where he writes: “An attention to sound will provoke us to modify our everyday ontology and common conceptions of matter,” leading the artist to consider the branch of acoustics defined as a cross-disciplinary practice that combines biology and the production of sound.

Understanding sound as a scalable material, Mooney tends toward forms that derive from a capacity to emit: systems that act as throughways or generate sound through air-filled cavities, making connections between a whistle and architectural structures like a conduit. “The forms ultimately enact potential aspects of vocalization,” Mooney explains, “accounting for objects and their ability to act as agents—to hold a political voice as participants in public life.” Mooney’s background is in jewelry making, which is evident in the attention to detail and the scale of the work in relation to the body. Materials also play an important role, often incorporating pre-fabricated industrial materials such as electrical conduits, aluminum or composite boards, which are often presented in a semi-altered state alongside intricate yet humble cast silver objects and natural matter such as spray millet, lavender or cuttlebone. Mooney’s post-minimalist sensibility is akin to haiku—short yet profound and poetic statements that leave a lot of breathing room for interpretation. 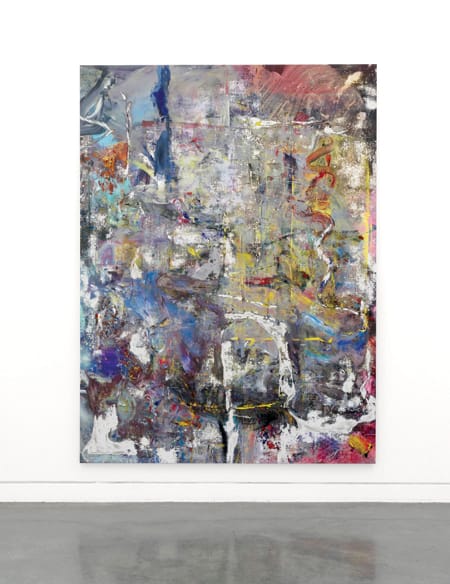 Liam Everett also approaches his practice in a poetic way. Casting a wide net over multiple ideas, his elaborate quasi-minimalist paintings and mixed media sculpture feed off of one another, from one idea to the next generating multiple conversations between them and because of them. Over time, through a process of elimination, and a form of distillation, things or surfaces are removed or moved—anything that is not needed is cast aside to leave only the remaining essence of an idea. “Intersecting these concerns are questions related to temporal constraints, namely the correlation between the primordial and the present,” says Everett.

Whether large-scale stretched canvases or a small vessel, salt, torn cloth, enamel or sticks, there is a complexity in the inherent meanings already present in the choice of materials that Everett uses; for him, everything is painting—even sculpture and performance. “The irony is that I am using the same set of tools, parameters and restrictions for both the paintings and the sculptures,” he says. “In the studio both directions are literally built on top of each other.” He is working on several sculptures at the moment, but has mostly been showing them outside of the United States, though for SECA he plans to work on a site-specific piece. “I am equally concerned with speed as much as I am with scale for the SECA project—this is why I will also be incorporating a series of ‘events’ that will take place during the course of the exhibition.” He notes that these are not performances, but are instead an extension of his studio practice.

SECA aims to provide opportunities for artists to hash out ideas, and use the museum as a means to present them in new ways. While some artists explore performance or collaboration as a way to engage with the public, it goes without saying that artists in general have a tendency toward reflection that is expressed outwardly in their work. With the prospect of federal government funding for the arts seemingly in jeopardy under a new administration, the example of the SECA awards seem more significant than ever, and demonstrates how institutions can play an active role in finding ways to nurture both individual artists and their communities. This year’s SECA awardees are setting the tone for a trajectory of pivotal work that expands San Francisco’s long history as a place where viewers can engage and share in the new art made here, right now.