Artist-filmmaker Lynn Hershman Leeson will be featured in two separate exhibitions opening this winter, “Civic Radar” at Yerba Buena Center for the Arts, and “Secrets from the Crypt” at Anglim Gilbert Gallery. Curated by Peter Weibel and Andreas Beitin, of ZKM / Center for Art and Media, “Civic Radar” was organized by Lucía Sanromán, and will include documentation of Hershman Leeson’s expansive career. Early work includes drawings and works on paper, along with assemblage, which investigate the female body and its adornments, as well as her extended performance piece, the Roberta Breitmore Project (1973-78) where she assumed the alternate persona of a heavily made-up blonde, drawing attention to vulnerable aspects of female identity. More recent works focus on the way that technology impacts our lives, and the pervasive impact of surveillance. Her experimental work with artificial intelligence and genetics will as well be revisited in this new exhibition, and several of her films will be screened, including !Women Art Revolution (2010), called by Holland Cotter “the most comprehensive documentary ever made on the feminist art movement.” “Lynn Hershman Leeson: Civic Radar” at Yerba Buena Center for the Arts runs from February 10 – May 21, 2017, while “Lynn Hershman Leeson: Secrets from the Crypt” at Anglim Gilbert Gallery runs February 22 – April 1, 2017. 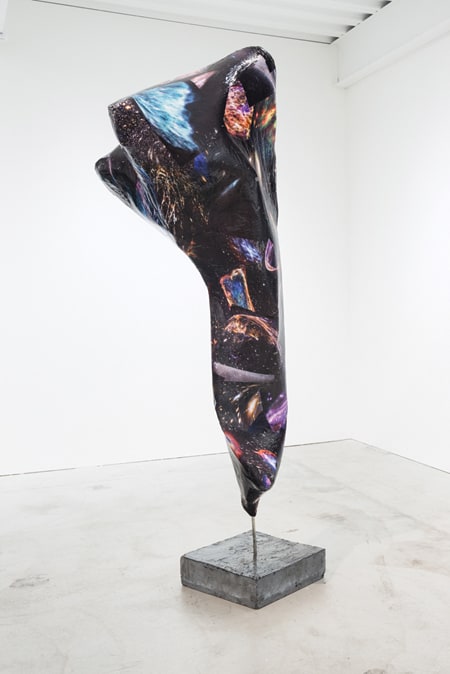 Anouk Kruithof, a Dutch-born artist who now lives and works in Mexico City, uses found images as the seed for conceptual work involving photography, sculpture, installation, artists’ books and performance. Inspired by Larry Sultan and Mike Mandel’s 1977 Evidence, a book of images gleaned from various government, corporate and scientific archives, highlighting how context creates meaning, Kruithof’s new work builds on this foundation, exploiting the ready access of shared visual information. The work poses the question of how one may consider the photograph in an era when the veracity of the image is suspect. Her new show “#EVIDENCE,” at Casemore Kirkeby, located in the Minnesota Street Project art complex in SF’s Dogpatch, addresses the idea of photographic evidence in the form of 650 images taken from public Instagram accounts and recycled into intriguing works ranging from collages to sculpture. In several works, images taken from IDs confiscated by the TSA have been enlarged, flatbed printed on flexible plastic sheets, and draped or wrapped around enigmatic metal armatures; other works present colorful amorphous shapes in papier-mâché billowing up from tiny, selfie-stick bases, while here and there images emerge from the patchwork fields of color. “Anouk Kruithof: #EVIDENCE” is on view at Casemore Kirkeby from January 11 – March 18, 2017.

Los Angeles-based, Korean-born Won Ju Lim has made a name for herself creating mixed-media sculptural installations referencing architecture, at times employing Plexiglas and light in Judd-like boxes containing interiors based on architectural models. “Casting,” her first exhibition at Haines Gallery, will include a series of new works— a video, a pair of complementary light boxes, five portraits from her Broken Paintings series—as well as two recent sculptural works with a strongly geometric foundation closely related to architecture. Much of her recent work was sparked by her interest in the writings of Marcel Proust, as well as the work of other artists, writers and filmmakers who were inspired by his achievements. Proust’s descriptions—of a steeple, or of a yellow patch in a Johannes Vermeer painting—serve as subtext for some of these works. Of the title, the gallery notes, “One can cast a spell, a net, a form, a vote, and a shadow. ‘Casting’ echoes the fluid and multiplicitous meaning of the word.” The life of Proust’s longtime housekeeper and companion, Celeste Albaret, also informs the content of many of these works. In this show, the artist will share her first venture into film—something one may certainly cast, as well. Won Ju Lim “Casting” at Haines Gallery, runs March 2 – April 29, 2017.

San Francisco-based Ward Schumaker—originally well-known for his illustration work for high-profile clients like The Washington Post and Hermès—quickly achieved notoriety for his unique mixed-media works combining acrylic paint and bookbinding paste. His well-received 2013 inaugural show at Jack Fischer’s Potrero street gallery featured remarkable artist’s books, providing an excuse for his passionate yet disciplined investigations in the properties and potentials of paint. For his upcoming show at Jack Fischer, Schumaker will include new books such as Throat Singing in Drohobycz (2016), inspired by Polish author Bruno Schulz’ The Street of Crocodiles. Other new works to be shown, on Stonehenge paper mounted on canvas, reveal an underpinning geometric structure: some comprised of sets of stacked circles, muscular whorls of paint, taking their inspiration from Brancusi’s Endless Column (1938), others using a grid or pyramid format comprised of squares, or circles, as well as occasional blocks of text. With a limited palette of black, white and red, augmented by glimpses of blue or green, the quality of intentionality of each brushstroke—and the care with which his seemingly random text blocks and blobs of paint are organized—assumes a primacy that is riveting. Ward Schumaker “priapus and rainfall” at Jack Fischer Gallery, runs April 22 – June 10, 2017.

Celebrating 20 years as part of the Bay Area art scene, Traywick Contemporary has launched a year of exciting programming, kicking things off with two concurrent solo shows of artists John Fraser and Steuart Pittman. Both artists share a quiet, minimalist aesthetic and a conceptual emphasis on art as a slow, thoughtful process. Fraser’s show, titled “Ecru,” presents a body of work spanning seven years, featuring wall-mounted assemblages incorporating vintage rulers, yellowed wooden T-squares, and other measuring devices, as well as wall-mounted works with a strong sculptural presence. Other objects made from found books deconstruct these tomes to their barest elements—end papers, tiny strips of binding, the quiet interjection of notes scribbled in pencil. Pittman’s subtle and meditative works on paper use geometric forms inspired by his neighborhood in Oakland; their edges vary from clean to jagged, like torn paper, in a muted palette emphasizing variations on beige or cream, with occasional forays into richer hues such as mauve, or red ochre. While keeping to a pared-down aesthetic, Pittman also reveals another side; his title—“The Twist”—alludes to an affection for Chubby Checkers. John Fraser “Ecru,” and Steuart Pittman “The Twist,” are both on view January 29 – March 25, 2017, at Traywick Contemporary, in Berkeley. 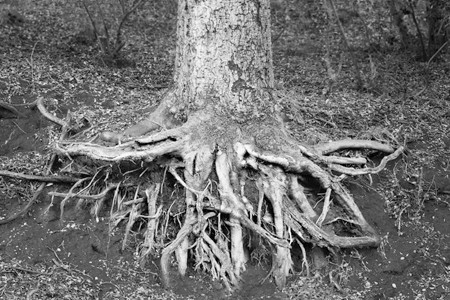 With an emphasis on a heightened awareness of the environment, Oakland’s Chandra Cerrito gallery will present two concurrent solo photography exhibitions rooted in the subject of trees: Sarah Bird’s “the fullest measure of you, is you” and Lewis deSoto’s “ARBOR/ARDOR.” Bird’s work will include life-size black and white photographs of California redwoods, reflecting on “their magnificent equal footing, and their essential role in our web of being” to portray them as compelling as any human subjects. Delicate sewn drawings and an installation comprised of thread and pins will complement her photos. DeSoto’s career, spanning three decades, crosses media of photography, sculpture, video and performance, his Native American heritage crucial to his perspective on the world. He will be showing three photographs and a performance video reflecting the intimate balance of energy of our human connection to this planet. Influenced by a study of Zen meditation, his performance reveals deSoto in the act of standing meditation in a windswept landscape as he witnesses the forces of nature. Both artists portray the natural world as timeless, yet fragile. Lewis deSoto “ARBOR/ARDOR” and Sarah Bird “the fullest measure of you, is you” at Chandra Cerrito Contemporary, from February 3 – March 30, 2017. 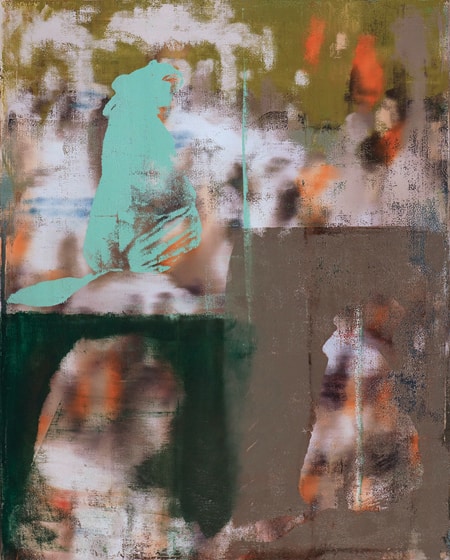 Human experience, and the way our images and actions may coalesce in a variety of ways—often falling into familiar grooves, or patterns—informs the work of artist Philip Buller. This March, Dolby Chadwick Gallery will present an assortment of his large-scale works. Buller has recently begun working with found photographs that feature crowds, often employing an improvisational painting approach incorporating printmaking techniques as well as a Richter-like use of the squeegee, to create colorful, figurative oil paintings on linen. Brilliant abstract patches in orange or yellow may burst like poppies amid a scattering of hats, or a grid of windows. Mining sources ranging from vintage photo books, Renaissance art and Eadweard Muybridge to images found on the internet, the artist gleans visuals that speak to him for a variety of reasons, then subsumes his individual figures and actions into a vibrant display of intersecting forms. Inspired by screen-printing techniques, Buller often paints the linen through a mesh window screen, incorporating the residue left on the screen elsewhere in the composition, or in a different work entirely. Says Buller, “It is my intention to use these images as one might use a brush stroke… I intend to use them freely, with abandon even.” Philip Buller “Human Patterns” can be seen at Dolby Chadwick Gallery March 2 – April 1, 2017. 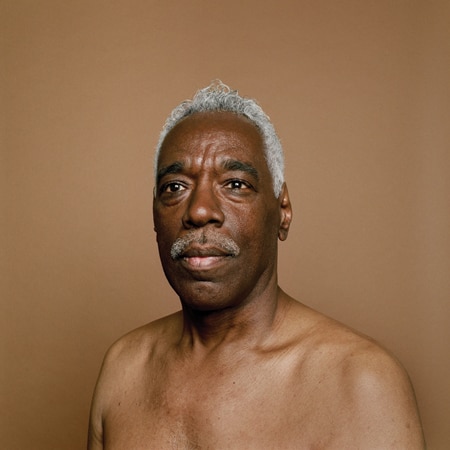 Originally from the UK, Erica Deeman moved to the Bay Area five years ago to study photography. It was while working at Pier 24 Photography, a non-profit space on the SF waterfront, that her striking portrait series of African American women caught the eye of the director, Christopher McCall, who suggested she enlarge the scale. Deeman took his advice, although this move necessitated reshooting the entire series, as well as a shift from a digital process to use of film and a medium-format camera. “Silhouettes” garnered further notice, as well as gallery and museum showings, and this dynamic young artist is now gaining increased visibility in the SF art scene, having also recently received numerous grants and awards. In her upcoming exhibition at Anthony Meier Fine Arts, “Brown,” Deeman will continue her explorations of identity—this time focusing on subjects who self-identify as male—once again celebrating the dignity and power, as well as the diversity, of subjects whose ethnicity falls within the African diaspora. These beautiful and dramatic photographs reveal a commitment to, and reverence for both the history of photography, and for the tradition of portraiture. “Erica Deeman: Brown” will be on view at Anthony Meier Fine Arts from March 24 – April 28, 2017. 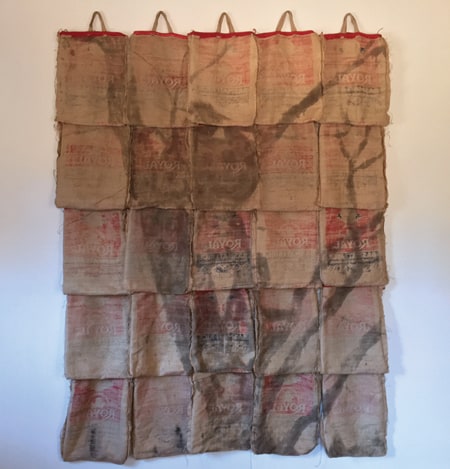 In 2015, the month of May was proclaimed as Asian Pacific American Heritage Month by Barack Obama; this spring, Oakland’s Vessel Gallery will present its own examination of Asian American identity with “Excuse Me, Can I See Your ID?” While plans have been in the works for two years, it is now in the context of the xenophobic thrust of the new administration that gallerist Lonnie Lee will present this group show. Artists including Cherisse Alcantara, Dave Young Kim, Heyoung Kim, Kyong Ae Kim, Juan Santiago, Sanjay Vora and Evan Yee, along with individuals incarcerated at San Quentin, will offer works in highly diverse media. Traditional oil paintings, encaustic-coated photographs, installation, porcelain sculpture and paintings on burlap sacks will address the variety of interpretations, and stereotypes, of what it means to be an “Asian American” in our society. Memories of internment camps remain fresh in the minds of many. States Lee, “in this show, I can shine light and give space and time to Asian American artists, to understand our own community’s issues both historically and in our present moment.” Vessel will also host an Asian film festival curated by Jasmine Lee Ehrhardt. “Excuse Me, Can I See Your ID?” goes on view at Vessel Gallery March 31 – May 27, 2017.