Meow Wolf, Santa Fe’s DIY homegrown artists collective, blossomed this spring with 20,000 square feet of fable-making fine art fun in the form of a massive, labyrinthine, and immaculately crafted installation. Fully immersive, and interactive in extremis, your tour to House of the Eternal Return begins on the front lawn of a complete Victorian residence (in Mendocino, CA) built to scale inside Santa Fe’s old Silva Lanes Bowling Alley. It soon morphs through a series of spatial/temporal anomalies into an incredibly wide variety of surreal spaces and settings. From séance to space station, from tree house village within an interactive light-and-sound garden to an ’80s arcade where all the video-games are free, from a scary bug museum, to the streets of a neon Wild West performance space, to a path through aspen trees that see into a black-lit ocean bottom where a diver like yourself remains blissfully suspended in the endless depths. Around every turning corner, time, space, architecture, and imagination become ever more elastic. “Amazing” is the common utterance, as visitors began to grasp the sheer quantity of invention and hard work that have gone into the mind blowing experience that is The House… that Meow Wolf built. Having opened on March 17, 2016, the installation will remain on view and is set to evolve over the next 10 years. 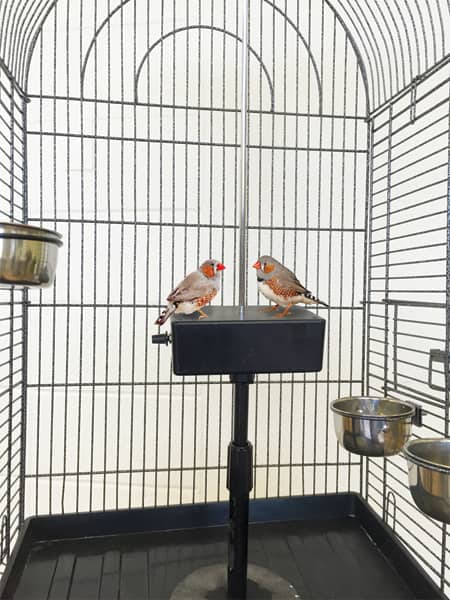 Raven Chacon (b.1977; Fort Defiance, Navajo Nation, AZ) creates art at the conjunction of the aural and visual, as a composer of chamber music, a performer of experimental noise, and a conceptual-visual artist associated with the Native art collective Postcommodity. Currently, his work has been given a spotlight in the exhibition “Lightning Speak: Solo and Collaborative Work of Raven Chacon,” at University of New Mexico Art Museum, at Albuquerque. For the large three-channel video Gauge (2013-2015), that premieres in this UNM exhibition, Chacon collaborated with artists from across the US and Canada to stripe an iceberg with natural pigments and ash. As the horizontal bands of color melt and vanish, the utter dependence of culture upon a balanced eco-system is literalized. In another nature-culture jam titled surrealistically While Contemplating Their Fate in the Stars, The Twins Surround The Enemy (2003), two zebra finches are placed in a cage with a Theremin whose sound and pitch is varied by the movement of their bodies. Over the course of the exhibition the birds acculturate, the musical instrument is naturalized, and the sounds, and the musical language, emitted by each entity arrive at a state of dynamic harmony. In his more percussive piece, Report (2001), Chacon performs an original score using various firearms as “instruments of musical defiance.” The show opened January 29. Catch it if you can. It melts back into the sea on May 14, 2016. 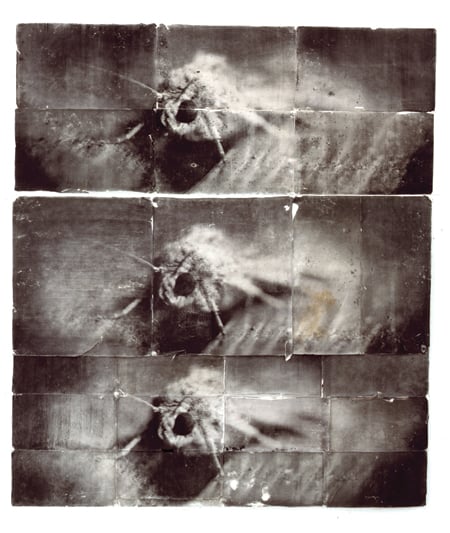 Count on 516 Arts in Albuquerque for the region’s collaborative PhotoSummer 2016 initiative. For the second summer in a row, 516 Arts will, in collaboration with the University of New Mexico Art Museum, CENTER in Santa Fe, The Santa Fe University of Art and Design, and the ever-roving Axle Contemporary, present a diverse program of workshops, panels, lectures, and yes, exhibitions related to contemporary photography. The blue chip highlight of this year’s schedule consists of two large-scale photographic pieces by the Starn Brothers from their Absorption of Light series, in which moths romanced by flames are magnified in the moments just preceding their self-inflicted immolation. What is it about the seductive brilliance of light set against the deep ground of mortality that so mesmerizes? What causes creatures to blaze into the night? Running simultaneously at the 516 space is “As We See It: Contemporary Native American Photographers,” featuring the emerging artistic voices of Jamison Chaz Banks, Tom Jones, Larry McNeil, Wendy Red Star, Matika Wilbur, Will Wilson and Tiffiney Yazzie.

By reframing the relationship between photographer and subject, and focusing on the interconnectedness of people and place, these First Nation artists use the medium of still photography to address a wide range of issues, including identity, economic, and environmental politics through uniquely indigenous lenses. Both shows are on view from June 18 – September 17, 2016 at 516 Arts. 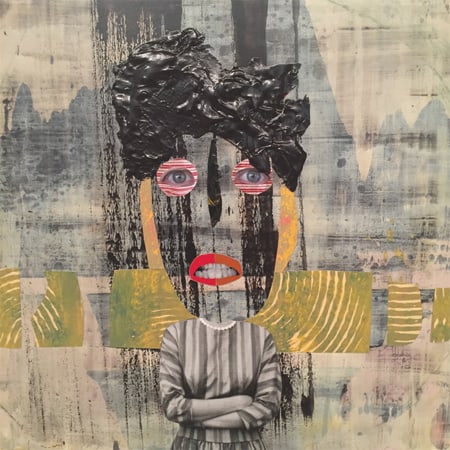 “Mind Made Up,” at Turner Carroll, brings together the work of Holly Roberts and Wanxin Zhang. This pairing of figurative artists, one a photo-based collagist from Colorado and New Mexico, and the other a ceramic sculptor from China and Oakland, CA links the two through their mutual adaptation of the old to create the new. They are both re-purposers of images and historical ideas in order to tell contemporary stories. Holly Roberts employs fictive personages and cartoon proportions composed seamlessly of various pieces of photo-realism and perfect paint in order to tell intimate and expressionistic tall tales and truths. Influenced by both the ancient terracotta warriors of his homeland and the California Funk movement, Wanxin Zhang constructs highly detailed, nearly life size, micro-cephalic, weathered, leathered, tragic-comic personages out of clay, history, and conceptualizations of political and emotional perspectives tied to the China of his youth. Both artists could be said to be working with elements of memory and psychology as they relate to the movements of the here and now. While Wanxin Zhang, like fellow gallery artist Hung Liu, tends naturally toward global political musings, Holly Roberts focuses in on the everyday magic in the mundane, but both, like good fiction writers, construct worlds, realities, and narratives driven by the convincingness of their imaginary characters. “Mind Made Up” goes up May 31, with an opening reception on Friday, June 3, and runs through June 19, 2016. 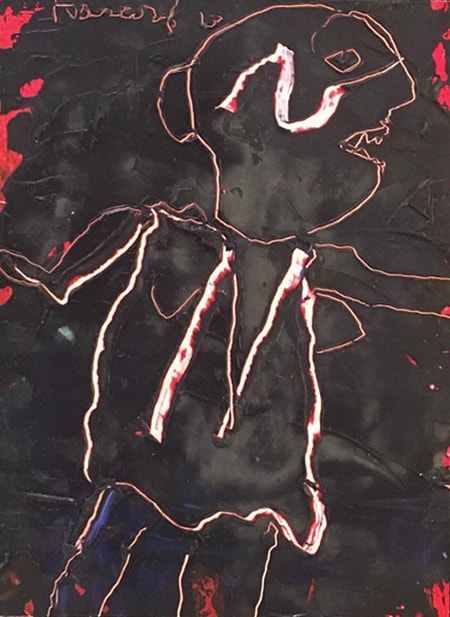 The pioneering spirit of “Abstract Illusionism” in painting has turned out to be a remarkable neo-expressionist, on an intimate, but potent scale. James Havard’s quirky, slapdash, splattered, dripped, dabbed, and drizzled figures capture the language of the human body in all its moods and modalities. With the whimsical bravado that characterized Paul Klee’s explorations, and an eye for the sublime in the ridiculous that resonates with Phillip Guston’s painterly point of view (coupled with an equally heavily impastoed process), Havard’s figures can sometimes initially feel remote, more muted perhaps. They tend to be smaller on the ground, but for all their rich interiority they are no less perfectly present in joy, anxiety, or repose than any well whittled-away Giacometti is in anguish or ennui. Havard’s great skill, one he shares with all three aforementioned masters (as well as with Twombly, Dubuffet, Tàpies, and Basquiat, to toss in a few more of his peers) is his ability to hone his works mercilessly, by intuition or by intellect, while also making them look effortlessly childlike, and even purely naïve. After figuring out how to paint well for well over 50 years, James Havard is now the master himself. This inaugural exhibition and formal grand opening of Mill Contemporary, newly relocated from San Francisco, opens June 3, with an artist’s reception on June 17, 2016. 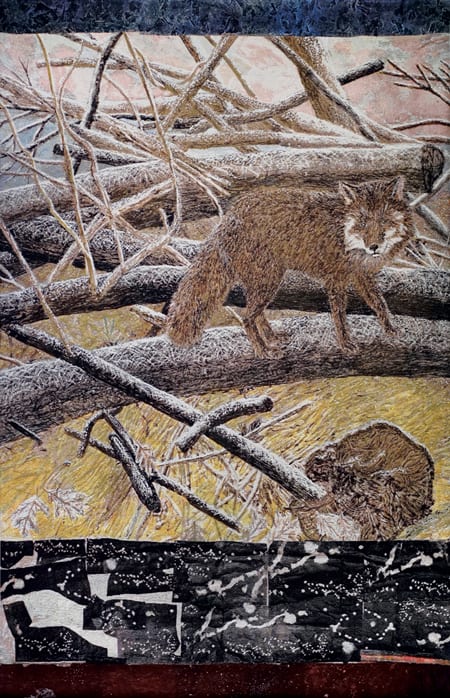 Internationally renowned sculptor and conceptualist Kiki Smith returns to Santa Fe via Peters Projects’ new curatorial program under director Eileen Braziel. Her exhibition consists of nine Jaquard loom weavings fabricated to the artist’s designs by Magnolia Editions, an Oakland, CA based fine art printmaking studio, limited edition book publisher, and probably the nation’s premier source for connecting artists to digitized industrial looms. The list of significant artists who have worked with Magnolia is staggering, and includes figures like Chuck Close, Joan Brown, Alex Katz, Hung Liu, Ed Moses, Nancy Spero and Leon Golub. Kiki Smith’s weavings sees the artist seduced by the color and imagemaking capacities of the medium to produce mystical, Blake-ian images that don’t shy away from beauty. Smith’s messages in these pieces are no less poignant or pointed than those of her sculptural work and they continue to envelop concepts of shamanism, animism and the human body. But the weavings foreground elegance and sincerity, thereby softening the shock values. Oddly enough, it is perhaps in these tapestries that Smith’s skills as a draftswoman-painter-printmaker come through the most. Like great cards in a 21st-century environmentalist’s Tarot, these woven pictures warm the walls and reward study with symbols and stories from a world where the personal is political indeed, but it is also the pastoral. “Woven Tales” at Peters Projects opens May 13, 2016. 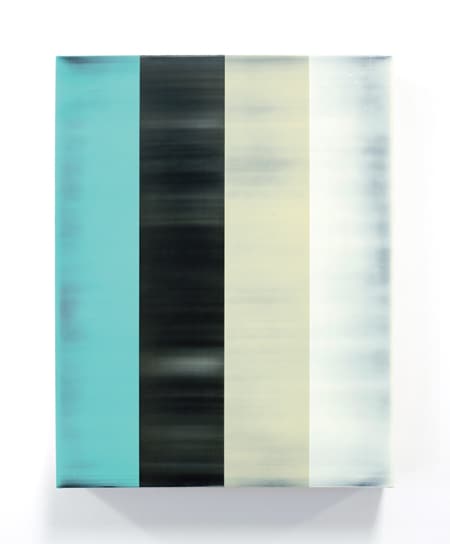 In Alfred Young Man’s texts he argues for the aboriginal sources of European Modernism, shorthanded under the blanket-term, “Hopi-Constructivism.” Were this rigorously honed, hard-edged, symbolic design sense all that Europeans had taken from the indigenous people of the Americas all would be well. Fortunately, in places like Santa Fe, where indigenous artists are the backbone of the contemporary creative economy, Modernist traditions of geometric abstraction are reassimilated into their source with great results. Jeff Kahm, Plains Cree, born in Edmonton, Alberta, is at the forefront of this international contemporary confluence. Combining influences from the extensive pre-Modern history of stripe imagery and symbolism with early Stella-esque experimentation he has evolved a growing body of great paintings. Kahm’s new synthesis of form employs freedom and rigor a bit differently than does Euro-abstraction in general. The rules governing color choices, modulations of tone, and scale-shifts seem less proscribed than in Ellsworth Kelly’s work, or even Brice Marden’s, while the results are no less meditative, and actually, hold up better over time. They may well entail a greater depth, a more grounded backstory, and a more sophisticated sense of design. “Jeff Kahm: New Paintings” opens June 3, 2016 at Chiaroscuro, and retains visibility through July 4. 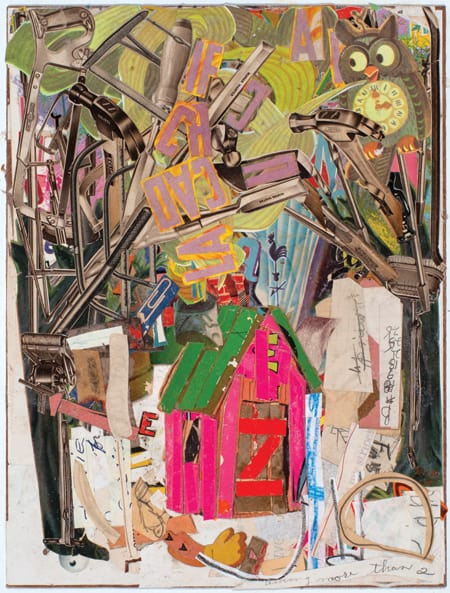 Cut and paste Lance Letscher into the collagists’ pantheon. Include him along with Hannah Hoch, Max Ernst, Jess, and Fred Tomaselli when you want to talk about quality culling, cutting, conceptualizing, crafting, and composing. Letscher’s commitment to his sizable chine colle images on Masonite panels shines in his meticulous attention to details. His subtle use of text tends to up end essentially abstract images built of figurative elements. His is a love of complexity and chaos, of letting the music go bang, of watching the machinery collapse. Jean Tinguely’s Homage to New York (1960) haunts the periphery. There is something both terrifying and exhilarating about boarding the visual and contextual roller coaster rides that are Letscher’s tightly-wound-until-they-come-unbound compositions. Critiquing post-industrial materialism with its blind insistence upon unsustainability, Letscher lets wild, Escheresque abstractions interrupt scores of musical instruments, household goods, frightfully abundant footwear, etc., frozen in the swirling motions of a top-heavy consumer economy careening toward topple. A Koyaanisqatsi-ish sense of the soul-siphon-ing rush that is the mundane military industrial program, and the sheer scale of material production required to keep the worldwide corporate consumerist fantasy afloat is evoked in Letscher’s masterfully manic, slyly satirical, and consummately played, cubist constructs. “Lance Letscher: Secret File” at TAI Modern, opens June 3 and runs through July 2, 2016. 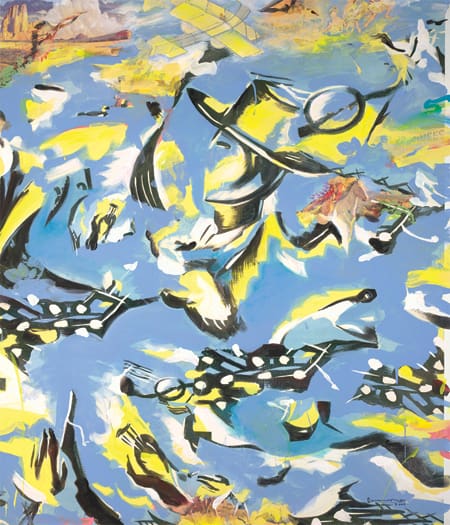 The wilderness of signs for Bruce Helander is the pastiche called post-modernism left in the wake of the Duchampian readymade, post-cubist collage, and an art predicated à la Walter Benjamin and Arthur Danto on an age of mechanized, digital reproduction. An established artist, art writer, curator and educator, Helander’s image objects are stylistically diverse, though all retain a subtle complexity that rewards careful looking. His recurring embrace of early 20th century cartoons as an (always slightly off) symbol of innocence within his inspired assemblage and collage works is a subterfuge for an anarchic subversion percolating beneath a quicksilver quicksand of ambiguous associations. Like Sigmar Polke, or Neo Rauch, whose work his sometimes resembles, he pulls from a wide variety of sources, including old letters, thrift store knick-knacks, and discarded histories. Helander’s erudite image poems play endless intellectual games with art historical allusion and homage. He orbits certain subjects as places for making discoveries. His equine pieces-Bronco is a great example-and his iconic nudes tend to be some of his most fecund and subtle explorations, recalling artists as stylistically disparate as Lisa Yuskavage, Wangechi Mutu and Willem de Kooning. “Bruce Helander: A Solo Exhibition” opens June 10 and ends June 26, 2016 at Tansey Contemporary.