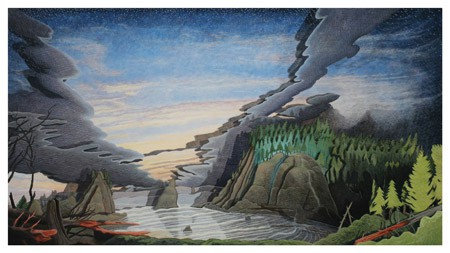 Seven painters and sculptors exhibiting regularly in Seattle and, in a few cases, nationally and internationally, have loosely coalesced into a hitherto unacknowledged group—the dystopian artists of the Natural Catastrophes School. Lorraine and Howard Barlow, Nathan DiPietro, Ben Hirschkoff, Mary Iverson, Ryan Molenkamp and Ula Trudnos are charter members of the Natural Catastrophes School. They share a horrified vision of what nature has become and what art about nature must become: prophetic, hortatory, elegiac and humorous about the end of nature as we know it. Far from Romantic, Wordsworthian idealists, the members of the Natural Catastrophes School are “pre-grieving” the end of nature, as one of them put it. These artists are reshaping the direction of landscape art after its 150-year love affair with photography. When used, they turn photo-sources on their head to exaggerate realistic and gruesome details of nature’s fate—not just in the Pacific Northwest, but on a global scale.

Dystopianism is hardly a new preoccupation, given the rash of post-apocalyptic artistic visionaries who have peppered the region over the years (see Morris Graves, Phillip McCracken and early Charles Krafft). Like modern-day Jeremiahs and Cassandras, their contemporary successors approach Victorian levels of moral outrage at the indignities perpetrated on nature and the environment. The Industrial Revolution gave rise to Romantic painters such as William Blake and J. M. W. Turner and later, in the US, German-born Albert Bierstadt and the Yellowstone School among others. Preferring New York City, Bierstadt—the first famous American artist to paint the great Pacific Northwest without having first visited here—bowed early on to photographic aids and others’ accounts. For 21st-century eco-artists, human and corporate development encroaching upon natural settings embodies the power of the villains and profit-seeking instrumentalists engaged in nature’s inexorable shrinking, leading to the irreversible destruction and disappearance of wilderness and wildlife habitat. Ben Hirschkoff has been constructing his various Attempted Rain and Radio-Controlled Cloud series for over 15 years. Objectifying weather into a consumer product by employing hardware-store lighting fixtures, retail display equipment and repurposed aviation detritus from the now-defunct Boeing Surplus, Hirschkoff is creating caricatured surrogates and flimsy replacements for real weather. Sound, kinetic elements, “flicker-flame” light bulbs and high-grade tinted plastic stand in for pelting rain, lightning bolts and other “managed” downpours.

“The shape of clouds is a cliché in nature painting, but I’m more interested in the artificiality of our perception of nature. Our basic building blocks for understanding nature are so remedial,” Hirschkoff notes. Sounding bleaker than ever, the Seattle resident laughs at the same time he states, “We’re screwed, because humanity thinks they can handle it all, but fracking could cause a super-earthquake. I don’t want to be a worry wart, but this is going to occur unless there is a solution to the problem.” The Sky is Not Falling (2006-2015) is a room-size installation that upends Radio-Controlled Cloud by putting depleted rain clouds on the floor and mounting 25 poles in regulated rows to simulate rainfall. Attempted Rain: Mechanical Refrain (2006-2015) mimics a theatrical stage with an upper curtain doubling as a cloud. At 15 by 16 feet, it echoes painting’s rectangular landscape format, but seems to have expelled any natural growth. Before Hirschkoff and the others, occasional prophet-visitors to the region captured the crushing grandeur that titillated Bierstadt. After the May 18, 1980 eruption of Mount St. Helens, the Seattle Arts Commission invited Emmet Gowin and Frank Gohlke, both distinguished American photographers, to respond to and document the biggest single natural catastrophe in the state since the 1894 eruption of Mt. Rainier and the Seattle earthquakes of 1946, 1949, 1965 and 2001. Gowin and Gohlke’s efforts applied 19th-century technologies of photography in devastating, radiant detail to the volcano, largely seen from the air. Barbara Noah, a printmaker and sculptor, used photographs of the eruption to make a series of large-scale photo-collage assemblages, as in Portrait of the Mountain as a Young Molehill (1982).

Ryan Molenkamp has also turned to the volcano—all of them—with a vengeance (see cover). In a recent series of exhibitions at Linda Hodges Gallery and Seattle Art Museum Gallery, Molenkamp rejects photography in favor of pseudo-authentic geological and geodetic survey maps posing as cubistic abstractions—like Cézanne’s Mt. Ste. Victoire run through a cheese grater. Repairing a rift between abstraction and landscape painting torn by photography, Molenkamp, like Surrealist-inspired, fellow Catastrophe artists Trudnos and DiPietro, is freezing and schematizing natural phenomena such as magma, lava, molten cores and destroyed adjacent territories in a cooled-down palette of red and yellow, ochre and blue, with very little telltale green. In Molenkamp’s dystopia, there has not been time for growing things to return after the continuous apocalypse of volcanic eruptions.

Living and working in the remote Cascade Mountains village of Twisp, WA, Lorraine and Howard Barlow are surrounded by red-state (and redneck) neighbors, although they, like DiPietro, have emerged from one of the most interesting art departments in the state, Central Washington University in nearby Ellensburg. A kind of UC Davis outpost of funky figuration, off-color humor, and Surrealist-inspired painting and sculpture, CWU has produced numerous startlingly talented artists whose subjects often reflect their immediate environment. The Barlows adapt the morbid, death-driven side of Surrealism—Max Ernst, early Dalí, late Magritte—to bizarre combinations of sport-hunting memorabilia, gun lore, taxidermy, all frequently covered by crocheted or knit wool yarn. The husband-wife artist couple twists and tweaks American lifestyles with eccentric yet serious alterations. 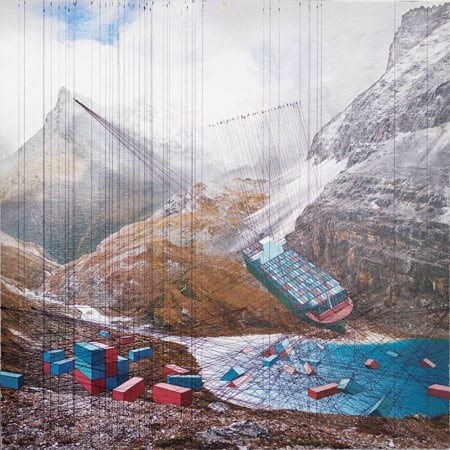 To Ula Trudnos, a Polish-born artist whose family was exiled to New Jersey because of her father’s Solidarity activities, genetically modified organic produce is a bigger threat now along with agricultural pesticides. Many of her huge, eight-to-nine-foot-high oil and acrylic paintings on canvas view the landscape in glaring, cut-away sections: polluted sludge and genetically mutated marine life at the bottom, as in One Agenda Rules Them All… (2003); transparent layers of liquid material about to cover the entire planet in the middle (Tidal Canto, 2014); and at the top, blithely indifferent consumer states prizing plastic bathtub ducks over real ones (Self-surveillance of health and consumption, obeying the rules so there’s no disruption, 2002). Trudnos lives and paints in a one-room studio at the Devonshire, an aging three-story brick building surrounded by high-rise condo towers. The Montclair State University (NJ) graduate and former student of New York powerhouse artist Julie Heffernan, Trudnos jokes about Poland that “they are not yet ‘advanced’ enough for an entire corporate takeover of farming, as in the US, but thanks to the European Union, now they can begin.”

Bosch-like at times or brimming with astonishing attention to detail, Trudnos has her first solo show (she is 36) at The Vera Project (August 13-27), an all-ages youth creative workshop in Seattle Center. The 14 tall paintings are a virtual panorama of ecological collapse done over the past decade and a half. Interestingly, a possible influence on two of her preoccupations—maritime imagery and a skewed viewpoint, not aerial, not frontal—may have been her work on a recreation of a 1939 New York World’s Fair exhibit, Salvador Dalí’s Dream of Venus at the Queens Museum of Art in 2003. Being immersed in constructing the dark, dank funhouse for weeks on end had to lead to the glistening, dangerously oleaginous surfaces of her paintings.

With Trudnos sharing Hirschkoff and the Barlows’ attachment to earth-bound implications of human settlement and wildlife habitat disruptions, including weather, Ryan Molenkamp is a transitional figure between the highly materialized response to natural cataclysm and a cooler, but perhaps even more terrifying and likely look at natural catastrophes, the tempera-on-panel paintings and colored pencil drawings of Nathan DiPietro (showing at Woodside/Braseth from June 27 – July 24) and the pseudo-scientific renderings and “projected outcome” paintings of Mary Iverson (who has upcoming gallery shows in Münster, Germany; and G. Gibson in Seattle, October 16 – November 21). 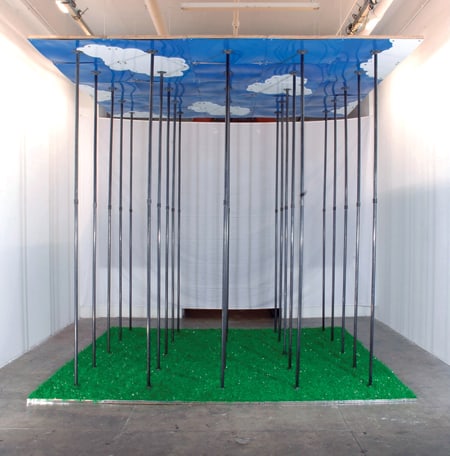 DiPietro’s quiet screams of de-peopled, highly regulated “repurposed nature exhibits” are painstakingly executed over weeks and months. Iverson’s numerous harrowing vistas of toppling container ships, bursting hydroelectric dams and a re-positioned Great Wall of China all have the convincing look of government-outsourced bureaucratic pie charts and graphic overlays. People are cubic units on a graph, but are otherwise nowhere to be seen. As with their other colleagues, Iverson and DiPietro both admire the more low-tech Hirschkoff, who once quipped, “Yes, there are manmade natural disasters, but there’s also Mother Nature who may say, ‘Take a break. You deserve it.’ Nature is ultimately complex; that’s why I like to cartoon and simplify it. You can’t grasp it all.”

Channeling Grant Wood and Thomas Hart Benton at times with a dry acid wit, DiPietro sees nature as already post-tense, a dystopia wherein even white picket-fence bungalows are roped off and open for paid-admission tours. Elsewhere, earthen dams are breached to accommodate summer vacation homes. Amid all this, DiPietro received an Artist Trust project grant to visit Seabrook, WA, an actual cookie-cutter Washington State coast summerhouse development with all the homes in identical New England clapboard style. The results are chilling and hilarious. DiPietro leaves the anger for us to experience after seeing his planned natural catastrophes, more Chinese in scale than American, with entire rivers and mountains moved to tweak a billionaire’s picture window view. In newer work, the artist extends his purview to Chile, part of the Pacific Ring of Fire earthquake zone and volcano chain. After decades of natural resource extraction, Chilean Memorial Construction (2015) suggests a vast landmass riven from sea to sky with ominous after-effects. Like Iverson, DiPietro is moving from the local and regional to the global.

Mary Iverson includes San Diego (Torrey Pines Preserve with Containers) and China (China Wall Animation, Scene 3, both 2012) in her zones of natural catastrophes. No landmark icon is too sacred to be safe; no beloved state park is above desecration or immune from assault. Cargo containers are a recurrent trope for Iverson, who teaches at Skagit Valley College in Mount Vernon, WA, and maintains a studio at Building C in Seattle’s Ballard neighborhood. Confessing that she idolizes Bierstadt, Iverson puts her praise diplomatically, as if Bierstadt’s reputation were still vulnerable. “He painted what was there, but he hopped it up a bit! I feel like now, compared to his day, we’re seeing things that will be lost. I’m feeling what I call ‘pre-grief’ for the future of nature. Thomas Moran and Bierstadt were revering nature; Ansel Adams was presenting it; and I am grieving over its imminent disappearance in the foreseeable future.”

As to the containers that appear throughout her art, Iverson sees them as symbols of capitalism and consumerism. “People don’t see that,” she laments. “However, if you live in a port, you can see it in the growth of the container industry: as the population grows, they mark the demand for food and shopping needs get bigger. Everything gets bigger, and it is all going to come in containers.”

The most vividly cinematic of the Natural Catastrophes School, Iverson agrees that she’s putting “exaggeration and predictions into my pictures. When you see something happening in a painting, it has more of an imprint.” Her Glacier (2012), an Alaska glacier inundated with containers, is less scary than Tipsoo Lake with Containers (2014), a Mt. Rainier scene that posits a tsunami sending containers high into the air to land at a 10,000-foot-high lake. Clashing diagrammatic lines—another trope—cover everything, emulating crisis management drawings or plans for the implementation of the impending natural catastrophe. They are presented here not only as hypothetical but plausible. This interface between the possible and the likely is crucial to retain the currency and urgency in Iverson’s work and that of her colleagues.