Moody Gallery consistently shows work by artists that have a stronghold on formal technique and particular feel for aesthetic balance. Accordingly, “Field Notes” is an exhibition from Bethany Johnson whose drawings “weave familiar and unfamiliar imagery in order to generate intuitive connections and quiet poetry.” She continues in her practice of creating intuitive field notes by documenting natural phenomena, disregarding hierarchies of scale or importance in the process. To create her drawings Johnson employs a grid of pale red and blue lines, similar to technical compositional notebooks and graph paper. With delicate yet confident marks, she charts the fluctuations and impressions of various happenings-occurrences that lie just beyond comprehension and therefore best documented in abstract, or interpretive, ways. Johnson’s imagery reads like a mass of printed information seen from a distance, loose depictions of topographic renderings, sound waves, or seismic activity imbued with a hint of distortion or resistance. Her horizontal and vertical lines mimic the longitude and latitude so trusted in geography, while flirting with visual phenomena of Pointillism. Bethany Johnson’s solo show, “Field Notes” goes on view at Moody Gallery, from October 25 – November 26, 2014. 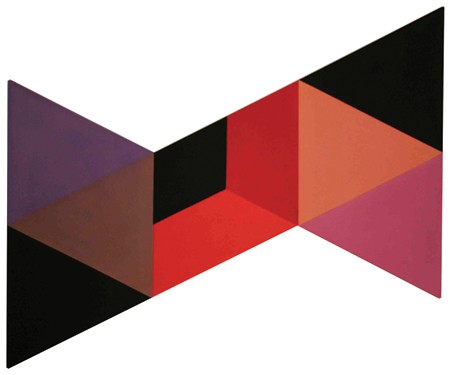 Uniting Modernist-influenced compositions with geometric-shaped canvases, Mokha Laget’s compositions have the aura of a quiet revelation. This fall, they will be featured in a solo show titled “Chromatic Constructs” at Sonja Roesch Gallery. Laget skillfully uses clay-based pigments to create a rich palette, and matte, velvety textures. Form butts up against form, each filled with colors that vary in hue and saturation-transparency and depth in the same painted space. Sometimes a square is a square, but relax the eye and that square might give way to illusions of 3D space-a building, a mountain, an entryway, or maybe a swimming pool. Laget’s artistic lineage is that of the Washington Color School, evident in her use of color field techniques. But her strong diagonal forms-which she refers to as “the wedge” -both divorce and marry her compositions, enforcing the inherent dynamic expressive nature of painting and resisting expectations of “hard edge.” Laget was born in Algeria and spent her early years in North Africa, with subsequent relocations to France and the United States. She currently resides in Santa Fe, New Mexico, the influence of which can be seen in colorful forms that pop and protrude with shapes referencing the long shadow, and deep pink lights of the Southwestern landscape, the rich blues of the desert sky. Mokha Laget’s “Chromatic Constructs” remains on view at Sonja Roesch from September 2 – November 1, 2014. 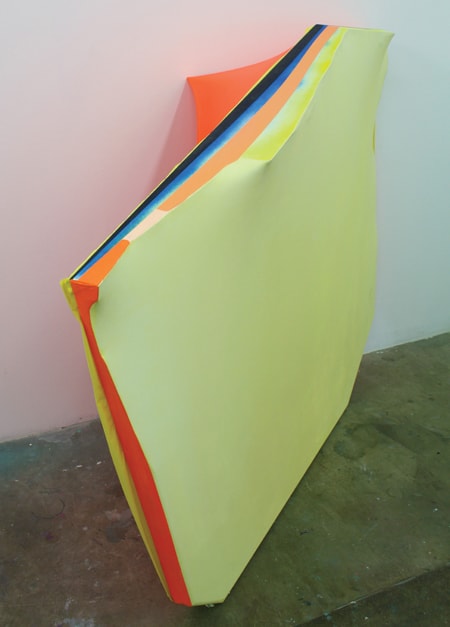 There is perhaps no more delicate relationship than the artistic mènage à trois of color, form, and space. In the case of Eduardo Portillo’s recent works, it’s not sex that binds these three players but painting. Portillo teases out the elements of both sculpture and painting with irregularly shaped armatures under a painted canvas skin, stretched smooth in some places while protruding in others. He situates the pieces on the wall, on the floor, or propped up in a corner in order to accentuate the planes of color, whether muted or fluorescent, which are interrupted by lifts of the canvas, edges that seem to glow, corners that bend, dimple, and pucker. The irregular shapes and varying sizes of his canvases work to animate the space in which they inhabit, infusing his painted works with a similar emotive power as that of his soft sculptures, some of which were recently on view at Kirk Hopper Fine Art in Dallas. An emerging Salvadorian artist, Portillo lives and works in Houston and has been actively exhibiting since receiving his BFA from the University of Houston. His exhibition “Soft Edge” at Anya Tish Gallery runs from September 5 – October 4, 2014. 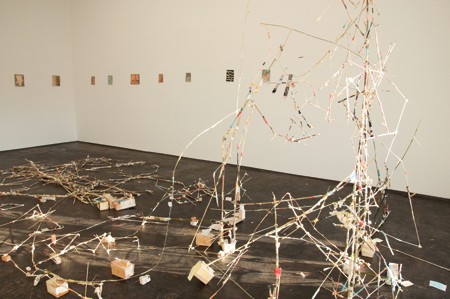 After eight years in New York, Eric Schnell returned to Texas to co-found the Galveston Artist Residency and to establish his studio. His artwork has been described “as a sculptural manifestation of the human psyche,” a non-linear, anything goes journey through a tangible representation of pure consciousness. For his intricate (some might say messy) installations, he uses detailed sculptural and illustrated elements to create a physical space from and for emotional conditions. Schnell composes piles of materials, including drawings, found objects, and a wide range of reference materials, to encourage free association and imagination. There is no distinct guide, no proper instruction, for how to navigate the worlds Schnell creates; instead, viewers must rely on their personal experiences to find their way and to decipher metaphors for some of life’s most difficult situations-for example, “reading” the implications of boats, chairs, forests. For “The Book of Pure Science,” his in situ exhibition at Devin Borden, Schnell has created new sculptures and drawings that continue his signature style as evidenced in his 2002 Hammer Projects show at the Hammer Museum in Los Angeles and numerous subsequent exhibitions. “The Book of Pure Science” opens September 5, 2014 at Devin Borden Gallery. 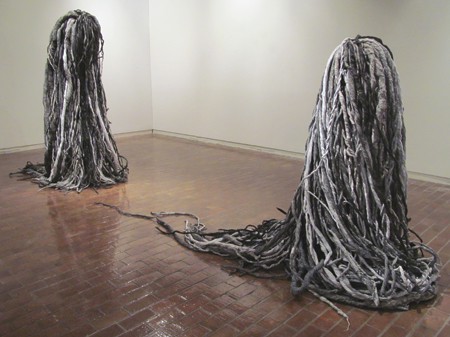 G Gallery positions itself as a grassroots, community-drive art space that exhibits a wide range of art, including works from outsider, emerging and established artists from around the world. For their September show, the gallery focuses on artists close to home, presenting an exhibition of artworks from husband and wife duo Brandon and Ashley Nepote who run San Antonio’s Grindstone Gallery. Titled “Necessary Truths,” the show features prints and sculptures, pulling from each artist’s individual interests and practice. Ashley’s most recent prints can be recognized by the layers within pictorial space created by objects and place, and objects within a space, that share the same pattern or line and color. The images correspond to what she sees as a hierarchy of social coercion. Her recent sculptures are large-scale steel frame sculptures made from made long twisted tendrils of paper and wire. Brandon’s sculptures are a curious as ever, arguably “conversa
tion pieces,” works which he describes as ”a discourse on interactions I have with people I encounter daily.” Using primarily steel and wood, he translates verbal processes into visual forms that he arranges in relation to words, context and meaning. “Necessary Truths,” by Brandon and Ashley Nepote, can be seen at G Gallery from September 6-28, 2014. 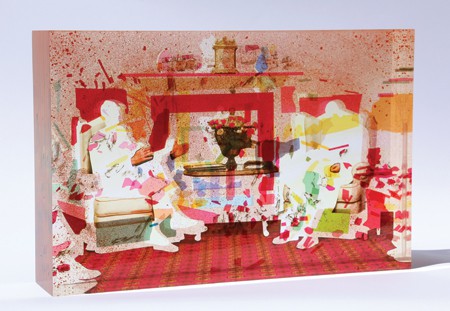 THE MISSION is proving to hold its own amongst its fellow 4411 Montrose resident galleries. This fall, the Houston branch of THE MISSION (a Chicago counterpart also exists) presents work from German-born, Colorado-raised emerging artist Anna Elise Johnson, current Core Fellow and former artist assistant to Julie Mehretu. Director Sarah Busch describes the exhibition as all new works from Johnson, including her free-standing acrylic block collages. The artist creates the pieces by pasting digital prints to layers of acrylic that she adheres with resin, creating a solid block form. The imagery of the prints is taken from news sources and historical databases. Johnson is interested in how power operates in such images and what role the images play in the normalization process. The result is a multidimensional, woven, colorful, gel-like abstraction of pivotal and/or popular historical moments and ideologies. As for how she translates this information into her artworks, Johnson explains, “as history repeats itself, so do its images.” The exhibition, titled “Moments in the System,” runs from September 5 – October 25, 2014.